I can think of few images that are sadder than an almost empty bookshop.
— Jorge Carrión

From Canada Day to Labour Day, I preside over a little book-filled world in the fishing village of River John, Nova Scotia. Or I did from 2017 to 2019. Then 2020 happened, and I became a bookselling enthusiast who desperately missed the smell of cardboard boxes, the crackle of packing paper, the snapping of bubble wrap, the inhaling of ink. I missed the UPS man and Linda Little — friend, author, sidekick, shop­girl. Instead of that every-day-is-better-than-Christmas-morning feeling, a never-ending yawn of ho‑hum sameness settled in. With a spiky-headed virus in our midst, I no longer held and gently opened each new book, sneak peeking into heavy boxes before we unpacked them onto the floor. Instead, I experienced the lost joy of my best friends — the books, I mean — who would always call my name as they claimed their places on the shelves. I missed that vibrational, intuitive, maybe even mystical work that I think many a bookseller might confess to knowing, at least those among us who think we can sell books, even poetry, on the side of a dirt road.

Fortunately, I’ve had memories playing on repeat this past year, memories that have let me roam during this interminable lockdown.

Every morning around seven thirty, I leave my house, stroll fifty metres up the way and duck underneath the lowest limbs of a gigantic oak, not unlike the “reading tree” at my grandmother’s place, where my love of books began some six decades ago. I check the water levels in the lime-green flower boxes on the crooked, purple-shingled cottage that was once a farmhouse. I open a peekaboo door and say, “Morning, Mabel” (it’s her place, after all). She rarely answers, which is fine, as she is an imaginary playmate from a picture book that I published a lifetime ago.

A repurposed wooden staircase is propped up against the left side of Mabel’s abode. This little ladder to heaven is a display shelf for a wild cascade of pink and purple petunias, shasta daisies, creeping greenery. I stop for five minutes, pinch off a few shrivelled leaves, pass through the opening of a fence of recycled sheet metal that is painted in mint pastels, then continue toward our barnyard bookshop and “dreamery.” 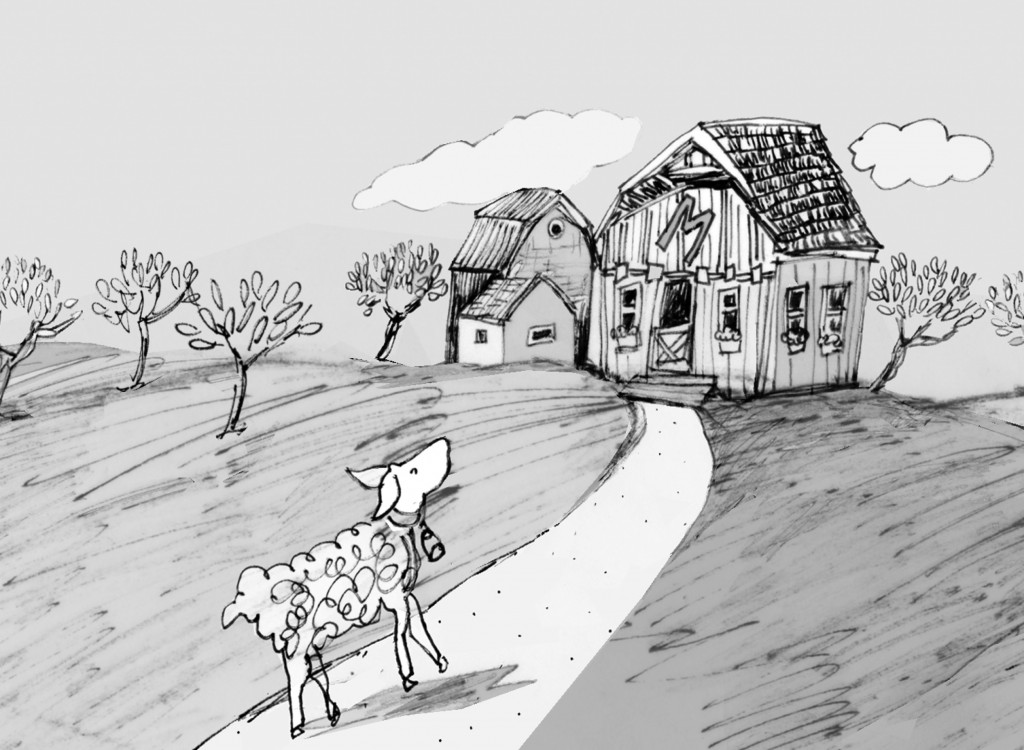 It seemed magical, even to us.
Image by Emma FitzGerald

As if on cue, the sound effects begin. A rooster crows, the donkeys bray, and there’s the frenzied dance of sheep in the loafing shed, their distinctive maaaaaas chiming in with whinnies and snorts and the frenetic clucking of hens. All the animals welcome me as I open up our shop in the back of the back of beyond, as one customer once described it. The critter chorus, plus the twangy wheeze of the screen door’s hinge, is the daily warning signal — She’s here! — that gives every character from every book a chance to scurry back inside their covers, after the previous night’s rowdy party.

I can’t help this imagining. After all, I am a writer, who just ended up as an accidental bookseller when our local school closed and my husband, Gilles, and I wanted to build something hopeful for the community. Lemonade from lemons. But — pinch me — I’ve discovered that I love being a bookseller maybe even more than I love being a writer or a reader. Sometimes I think I’m actually living in a storybook, a version of one of my favourite literary characters, Miss Rumphius, the Lupine Lady.

Once inside, a deep breath. These are familiar aromas I’ve come to appreciate if not embrace: a rubbery trace of giant tires, old wood, an attic on a rainy day, the ragged linen insides of musty steamer trunks, all mingling with . . . We aren’t too far from the barn’s “poopy pile,” as I once overheard a parent explain to her child, who had asked, “Ewww, what’s that smell?” The shop itself is a hundred-year-old granary, renovated mostly by Gilles, who needed a lair for his Kubota tractor — an orange dragon when no one is looking. Now, as I open the back doors to the pasture, a shaft of sunlight bursts in. There’s stardust glitter on the floors, felted angels twirling, quilts hanging like banners, a gigantic kite flying from the rafters overhead. And the books! I’m already giddy with bibliographic love so early in the day.

I sweep away the cobwebs because there are real spiders (sorry, Charlotte) and a few dead flies. The sound of broom bristles is soothing at first, and then it’s more like a restless whispering as I plan the rotating displays. Themed? Colour-coordinated? Funky? Elegant? And which authors to showcase today? This time alone with the books and the broom is almost my favourite part. But the best part, really, is when people start arriving at around eleven o’clock with wide-eyed wonder. They roam the grounds, greet the animals, gather in reading nooks. As they wave goodbye after a spell, they do so with diverse and award-winning titles in their hands. Yes, I carefully curate the books that I hope will leave for new adventures, but I do so with a lot of help from friends, publishers, and amazing sales representatives. And with help from other booksellers — the Real Ones, I call them. The professional ones with stores that stay open all year long. The intrepid ones who have survived the arrival of big-box stores and Amazon. The inspiring ones who will reinvent themselves during the pandemic.

Our colourful granary is small. In the past, we’ve averaged 200 people a day — around 9,000 bibliophiles in each of our three nine-week seasons. When we told people that we planned on opening this shop, the scoffers scoffed. But then those field-of-dreams believers, in this place that once built ships to roam the world, said, “Build it, and they will come.” We had no idea so many would. Mabel Murple’s Book Shoppe & Dreamery became a gathering space, an old-fashioned picnic spot underneath a fairy tree, a destination that tourists discovered and cottagers visited and revisited again.

Nostalgia has its place here: People hug people (and trees). They rub elbows with the drop‑by authors and with each other as they browse the shelves — those straight shelves that my husband built on crooked walls, the same shelves a team of friends and family painted creamy blues and greens.

So much work by so many went into the creation of this social enterprise, and it seemed magical, even to us. Because it was.

In May 2020, after a lot of discussion, we decided that social distancing and sanitizing and policing how many visitors can be inside at one time was not going to work for us. If people didn’t come or couldn’t travel, opening would be a financial disaster.

Instead of lamenting the loss, we told ourselves there was always next year. Gilles and I looked forward to a summer of freedom.

Then July started, and I missed my Rebecca of Sunnybrook Farm morning routine. The families were absent, the fairies were no‑shows, and even the donkeys looked like Eeyore. I avoided entering the empty shop until one rainy day, when I was overcome not with a craving but with an almost homesick feeling. It’s as if those lonely shelves wanted some face time with me. I grabbed something to read — Gideon’s Bible, by Gideon Salutin and his father, Rick — and zoomed across the road. Once inside, I saw more than a few dead flies, and instead of opening my book, I grabbed my broom like any good book witch.

In the centre of our vintage patio table, a clear vase is filled with pussy willows and chicken bones (the candy, not the remains of our hens). It sits atop an old desk drawer, stood on its end and painted salmon pink and a pencil-tip grey. The colour scheme matches the cover of A Pocket of Time: The Poetic Childhood of Elizabeth Bishop, written by Rita Wilson, with exquisite art by Emma FitzGerald. Instead of dust piling up, there are ten copies stacked within the crate and ten more fanned out at its base. I have printed, in pink and grey marker, an excerpt on a sparkly card:

What do you know, Gammie, that we
don’t know? . . .
There are always so many things to
wonder about.

Of course, I also spot a volume of Elizabeth Bishop’s poems, the collected works of Leonard Cohen, and those Gaspereau Press books that I like to stare at each morning. And there’s the latest from Sue Goyette and Brick Books, plus Collected Poems of Alden Nowlan, edited by Brian Bartlett.

On the counter by the cash, I see copies of Jorge Carrión’s Bookshops: A Reader’s ­Hist­ory, translated by Peter Bush and published in Canada a few years ago by Biblioasis. Scholarly and intimate, it always makes me feel smarter, even if I just read a paragraph here and there. Before the afternoon is through, I tidy up every shelf that’s filled with new and backlist titles, trail guides, my salty sea section, the whodunits. I adjust copies of Robin Wall Kimmerer’s Braiding Sweetgrass, which sit beside Thomas King’s Indians on Vacation. I even attend a much-delayed book launch for Deborah Banks’s stunning debut collection, While Crossing the Field.

But then I stop sweeping and — poof! — it all disappears.

“A bookshop is a community of believers,” Carrión tells us. Perhaps it’s because we’ve been believing so hard that we will reopen the doors to the Book Shoppe & Dreamery this summer, by reservation only, of course. But I can already see the groups of people, no more than twenty-five at a time, visiting Mabel Murple’s. I can see them walking about, waving to Monsieur Gilles in his atelier and saying hello to the donkeys and horses and hens and sheep and fairies. When the time is right, Mabel’s mother (or her body double) pops out for storytime, and then we all head over to the loaded-down shelves of wonderful books. On our way, we pass the pasture and the nooks, where real-life writers smile behind their masks, sharpen their Sharpies, and wait to sign their books and, after all this time, greet their readers.

Yes, something special’s always rising on the Sunrise Trail. I wrote that once — in a book I am oh-so-thankful to be able to put on the shelves of our whimsical little world once more.

Sheree Fitch is the author of Mabel Murple, Kiss the Joy as It Flies, and many other books.