As you might expect from its title, Butter Honey Pig Bread features a banquet of food. There’s baked mackerel (burned due to an absent mind), fresh guava (nibbled on until the “knobby, slimy ball” is “all sucked clean”), and a lovingly prepared triple-layer cake intended to mend a long absence with chocolate and caramel. There’s even a cat named Coca-Cola. Across the novel’s four sections, meals are shared, summoned from memory, or missed, and recipes are recounted step by step. Francesca Ekwuyasi’s appealingly rich debut celebrates the comforts and rituals of dishes, especially as they recall the tastes of home.

Home is Lagos — a hugely populous metropolis about which the characters harbour different shades of ambivalence or a desire to escape. Though she now lives in Halifax, Ekwuyasi gives readers an immersive experience of the city of her birth: a “voracious beast,” both ugly and beautiful. Taiye and Kehinde, estranged twins, return from their separate globe trotting lives — shifting between Paris, London, Halifax, and Montreal — to take care of their ailing mother, Kambirinachi. What follows is a long-delayed and much-feared reunion as each attempts to make fragile peace with difficult events from the past.

Butter Honey Pig Bread, which was longlisted for the 2020 Giller Prize, provides a complex and touching story of family and of the persistent regrets that fracture its bonds. Taiye, a queer woman whose desire, the “swell of want” in her lower belly, threatens to control her, is already home by the time the novel opens. As she waits for her sister to arrive, she disguises her apprehension with the preparation of an elaborate feast. While Taiye is the cook of the family, Kehinde is an artist. Juxtaposed against her twin sister, Kehinde appears more conventional, more insecure: “I’d hated my body for a long time, hated all the ways I felt it had betrayed me.” She is the “I” voice of the narrative — which is divided among the three women in rotating chapters. Until now, she has built a careful, managed existence a hemisphere away, reserving only a small space for her mother and sister. Kehinde makes the journey from Montreal to Lagos with her husband, Farouq, whom neither Taiye nor their mother has met.

Kambirinachi is categorically more complicated. Before we have a chance to wonder about her mental well-being — the reason why her “untethered” daughters have come home — Ekwuyasi sets up Kambirinachi’s story through a poetic rendering of a west African traditional belief. The half-page prologue launches a motif that plays out until the novel’s final chapter: “We are Kin here, in the in-between place where we live. We are one being, eternal, moving in rotation to the flesh realm only because we must. As sure as the tides, as the sunrise, bound to the rhythm of its particular realm.” 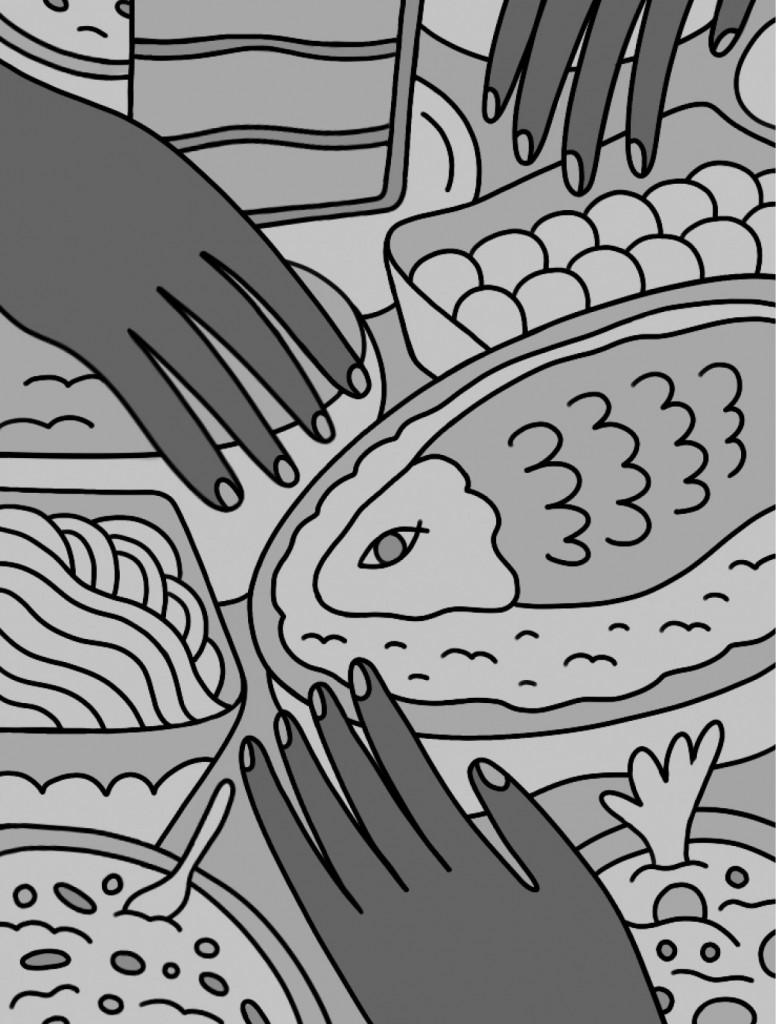 Sharing the comforts and rituals of home.
Image by Nicole Zaridze

The disembodied “we,” who call themselves gbanjes, circulate as voices in Kambirinachi’s head and act as narrators of her tale. “We sing reminders to the ‘I’s,” they state, referring to those (such as the twins’ mother) who have left the in-between place in order to taste the “unbearable misery of being in this alive body indefinitely.” gbanjes are spirits who bring misfortune to families when they die as children, only to be reborn again in an endless cycle. Kambirinachi chooses instead to stay. The “episodes” she experiences — are they madness or magic? — are a constant burden as she fears the fallout of her decision. Her daughters regard their flighty, delicate mother with a mix of bewilderment and concern: “She is a vast garden of water-hungry flowers in a land of perpetual drought.”

From Kambirinachi’s troubled childhood in rural Nigeria to the twins’ years of school, work, and relationships across Europe and Canada, each of the women faces dilemmas and heartache, giddy love and bouts of despair. Taiye sees herself as promiscuous, believing that she has had too many lovers: “She found herself too lustful, too gluttonous. She desired too much.” Her sister is “engulfed in a pitch-black hollowness” following a violent sexual experience during her adolescence. Kehinde pines for invisibility and nurses “festering feelings” about her seemingly untouched sister —“my quiet partner, closer than my shadow”— who didn’t come to her aid. Their mother struggles between fealty to this world and an adjacent one.

Alongside these three distinctive  characters, Ekwuyasi has created a whole set of cinematic circumstances for them to move through. Nightclubs, culinary school, spiritual awakenings, pregnancy, marriage, affairs, benders, jobs, and new cities, experiences, and friends are all rendered in fine detail. There’s setting and plot by the yard, but the book does not feel lengthy or bulky; the story’s pace is consistent and  balanced. Each character is equally important to the narrative, and the amount of material devoted to their perspectives meets the Goldilocks criterion: just right.

Butter Honey Pig Bread looks past food alone to assert the primacy of appetite. Across the various generations, we encounter a small village’s worth of questioning, journeying characters. Often they are in search of immediate metamorphosis, to find something alchemical. For the protagonists, it’s a wish to elevate the everyday — through some magical combination of ingredients — so that it isn’t quite so onerous.

Whether drawing attention to the consumption of alcohol and drugs (in an intentional overdose, in one instance) or pointing to a vivid memory of a man’s “tobacco-stained teeth,” Ekwuyasi consistently highlights a desire for transcendence. Primarily, it’s a carnal vision, a pleasant if warily hedonistic one whose dualism — life as difficulty and pain, substances (narcotics, warm bodies, a spicy meat stew) as short-term relief — is as old as time.

Doors to the next world open as Butter Honey Pig Bread closes. The composite dishes come together and old pains are cast aside; nevertheless, the future isn’t entirely set. Ultimately, as mother and daughters are spread between Abeokuta, in southwest Nigeria, Lagos, and Tangier, they are separate yet in a kind of communion. Their paths and their choices are their own, but Ekwuyasi gifts them a commonality of experience that holds each in the others’ hearts.

For a thoughtful novel about wandering and questioning, this alone-but-together status has the feel of a satisfying happy ending. The book is a hearty, far-ranging reminder about “the substance, the very matter, of life.”