Cormac McCarthy clearly had a lot on his mind in the mid-2000s. The notoriously aloof novelist had long distanced himself from his coastal literary peers, instead throwing in with a group of scientists at the Santa Fe Institute, in New Mexico, where they investigate the interconnected relationships of “complex adaptive systems.” For nearly thirty years, McCarthy has held the unusual role of the independent think tank’s sole and unofficial artist-in-residence — an informal Homer on hand to synthesize STEM research into haunting moral tales.

As the United States grew obsessed with the War on Terror and waged twin campaigns of clinical violence on the other side of the world, McCarthy began assembling what would become, in 2006, The Road, a foundational text in a golden age of post-apocalyptic storytelling. Each morning, as he developed his clairvoyant warning of what may await us in just a few years, he would drive his young son to school before heading to his office. Instead of writing, though, he would often procrastinate, loitering in the cafeteria and sidling up to world-renowned thinkers. He’d ask them pointed questions about the physics of determinism, the biological origins of language, and, most pressingly for an elderly man with a young child, the timeline for and inevitable causes of the end of the world.

Over tacos and Cokes, McCarthy became familiar with the painful details of climate change and of the Anthropocene. He then telescoped that knowledge into a near future, where a father and son navigate the ashen Earth in a last-ditch search for civility and hope.

Working from his studio in Montreal, Gérard DuBois has illustrated for a number of marquee clients — the New York Times, The New Yorker, GQ, even Canada Post. In 2019, he completed a lavish two-volume English edition of Italo Calvino’s Italian Folktales for the Folio Society, the British publisher of elegantly rendered classics. Then, as the world unravelled in early 2020, he was given the offer of a lifetime — a rare carte blanche. Folio asked him to propose any text, and the society would attempt to convert his vision into one of its highly collectible objects, with full-colour renderings on textured paper, all crafted and bound by a celebrated Italian book maker and tucked into an elegant slipcase. DuBois selected The Road. 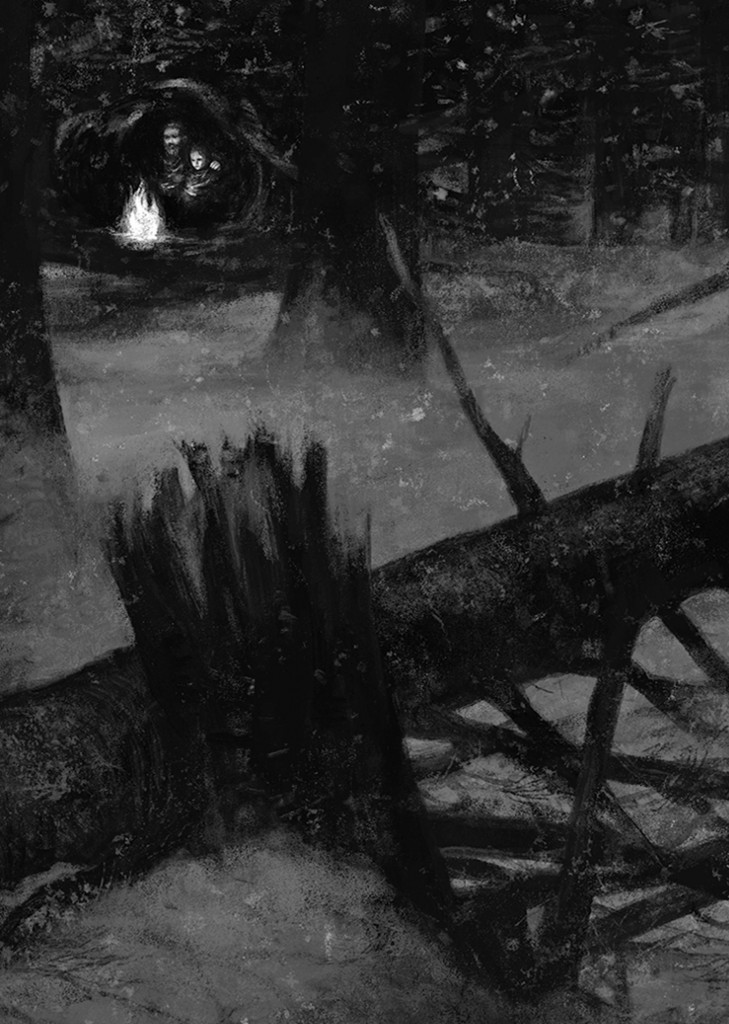 They appear almost as apparitions.
Image by Gérard DuBois; Courtesy of Folio Society

Like many of us in the first few weeks of the pandemic — who perhaps sought some ironic sense of comfort and control in disaster films and genre fiction — DuBois was haunted when he reread McCarthy’s stripped-down prose. Each scene of the dreamlike novel unfurls imagistically in the mind, as if a Magnum photographer has just been given a single roll of film and sent to document the entirety of a perilous journey. As the data visualizer Kemper Smith has shown using language-processing software, one-syllable words like “cold,” “long,” “dark,” “old,” “black,” and “dead” represent well over half of the roughly 700 adjectives in The Road. It’s this deceptively simple distillation of language that makes any visual adaptation of the work so challenging (and why a carefully made 2009 film was met with reservations by the McCarthy hive).

When DuBois learned that McCarthy was open to the idea of an illustrated edition but wanted to see a test image before committing, he began impulsively blending faint scars of red and black, layering the two thematic colours and many buried details in ways that echo the novel’s impasto use of descriptors. He then sent the author what would become the final image in the Folio edition. DuBois and McCarthy have never spoken, but the latter agreed to the project after seeing that picture: a chiaroscuro of the two figures on the beach, their backs turned to us, with a blood-red burst of light breaking open the dark sky.

Sensing the impossibility of creating a satisfying rendering of the protagonists, DuBois chose to obscure their faces in each of the six illustrations that he ultimately created, just as medieval artists once relied on the “hand of God” motif. Spaced evenly throughout the book, these function as codas to informal chapters. In each, the man and his son appear almost as apparitions — ghosts who evoke one of those simple adjectives, “grey.”

Consider DuBois’s opening image, which does not define a single plot point so much as set the tone for what’s to come. The father and son simply traipse along the edge of an abandoned city. McCarthy absolutists may fear that an illustrated edition might somehow derail the pull of the author’s simple prose, but scenes like these serve as momentary, almost unobtrusive refuges from the relentless brutality and frayed emotions that we must endure alongside the two characters. Like a confident filmmaker, DuBois leaves the most horrifying moments in The Road completely to the imagination.

During one of those cafeteria lunches more than fifteen years ago, McCarthy asked an archeologist to describe an immediate extinction event, like the one that killed off the dinosaurs. What if, for example, a meteor pummels the Earth and detonates a nuclear blast thousands of times more powerful than the one created just up the road from where they sat? The archeologist explained that whether after a sudden event or through the irreversible warming of our planet, few humans will ultimately survive. Those who remain will wish they had not. But a true apocalypse, in the grand scheme of things, will be only an anthropological one. Other life will endure and even prevail as humanity fades away.

The fragility of our ecosystem, McCarthy must have realized, is not an existential dilemma so much as it is a moral one. The Road grapples with the idea that we either follow through with or desperately attempt to undo whatever it is that we have done — be it destroying the planet, abandoning civility in favour of violence and authoritarianism, or simply creating another life.

McCarthy’s book is fundamentally a moral tale, but only time will tell if it is also an epitaph for his young son — and for all of us who remain down the road. Perhaps that’s why Gérard DuBois kept one other detail in mind when working on this tasteful edition: along with “dark,” “cold,” and “death,” Cormac McCarthy continually uses the word “good.”

Michael Doyle won a 2020 National Newspaper Award for his work with the Globe and Mail.