Care Of: Letters, Connections, and Cures

Uncovering trauma in ways that break, rather than repeat, cycles of violence is among the greatest challenges for a contemporary writer. It is also one of our era’s more urgent tasks. Silence is an increasingly untenable response to transgression, but speaking of it risks calling it forth. A careful hand, however, can shift the way authors and readers alike see themselves and the fraught worlds they inhabit.

With Nishga, Jordan Abel signals such a shift right from the start. The book’s cover displays both literal and literary fragments, empty spaces, and incomplete pictures, all awash with the colours of the Nisga’a nation: black, white, and red. The combination primes the reader for what’s to come: visual and linguistic representations that reinforce one another’s incompleteness by honouring, but not fetishizing, the pain they evoke. Against a white backdrop, the sans serif title appears in black, with only the ­letter H ­rubricated. Below it, six rounded swatches are stacked like river stones: four are black and white, filled with excerpts from a prose poem; another is a grey-scale superimposition of images, in which one can discern a frog painted by Abel’s father, Lawrence Wilson; in the remaining swatch, Abel’s parents appear in vivianite blue below translucent Nisga’a imagery — or maybe it’s the other way around.

As we enter the book, our eyes fall upon the artwork of Abel’s absent father — rendered in palish grey, as if there can be no colour where there is no father present. We see family photos and ghostly impressions of Nisga’a iconography — not pentimenti but carefully blended double exposures. Other pages are peppered with impassive legal documents, affidavits, idiosyncratic transcriptions taken down during life-­changing phone calls, and lecture notes with time-stamps. Out-of-focus photographs of the Coqualeetza Residential School, in Chilliwack, British Columbia, and blurry screenshots of websites about suicide stand in contrast with the crisp excerpts from the Truth and Reconciliation Commission’s final report. 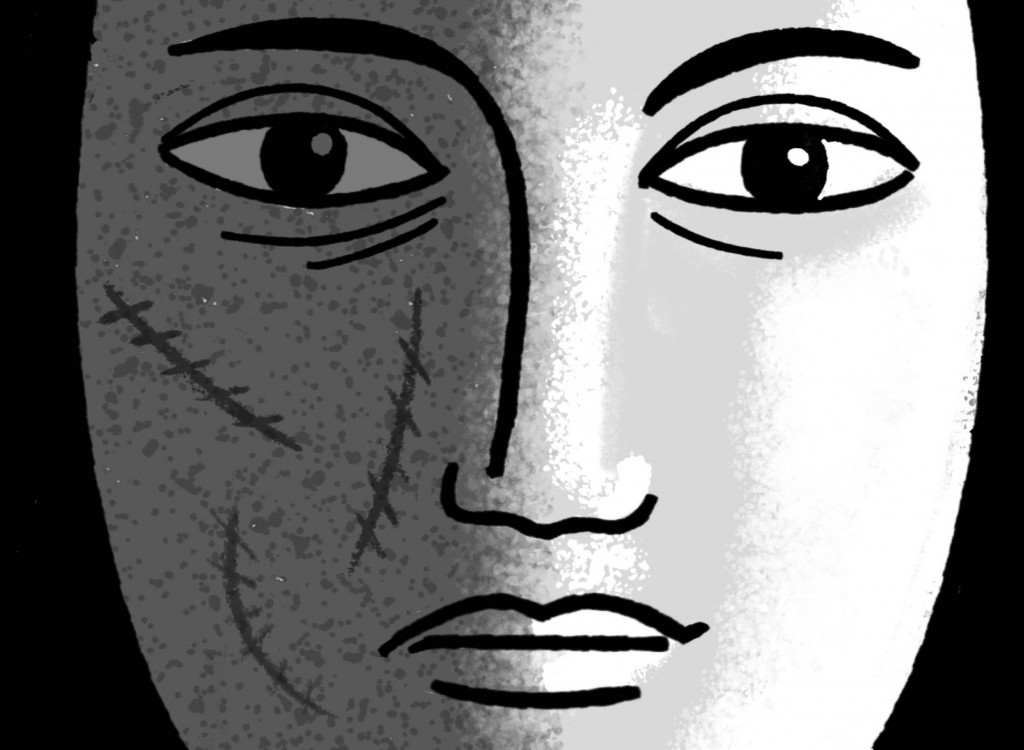 Cycles of pain and violence can indeed be broken.
Image by Jamie Bennett

Explicitly personal fragments, in the form of long paragraphs that all begin “I remember,” are also scattered throughout. “I remember hanging out on a patio with my friend Richard,” one of them reads. “I was drinking coffee without cream or sugar. I was telling him about this book I was working on.” After the scene setting comes the confessional break: “I had wanted to give up at so many points because it was just too hard to face some of these truths.”

One truth that Abel must face is that no quick trick of the mind can reconcile so many broken pieces, nor can a single image or poem be easily disentangled from others. The residential schools, intergenerational and lateral violence, cultural alienation, and loss of language are brought together and refracted again and again through artistic labour. If pain unmakes the world, as the American essayist Elaine Scarry has it, then Abel points a way through that unmaking in a sophisticated work of perspectival shifts and recontextualization.

“There is a bellowing in the passageways between the rocks,” Abel writes at one point. “There are moments of admonished madness.” Such bellowing isn’t surprising: the paradoxical drive to speak the unspeakable can be felt as a kind of madness. But Abel is no raving fool; he’s articulating something that goes beyond the boundaries of his person, something too large to present only once, neatly. “Somewhere there is the sound of rushing waters ringing through the deep stillness of the night.” Variations on this sentiment resurface sporadically — and that “somewhere” is almost always impossible to define.

At the same time, the demand for authenticity as purity threatens to poison the very waters that might revive and heal. Abel’s quest to find or create (much less assert) a shared culture, heritage, and identity is met from every angle with destruction, denial, and doubt. He is asked repeatedly where he is from, what he is. When he gives an answer — that he’s Nisga’a, that his grandparents are from Kincolith — he’s rebuked. “If you were really Nisga’a, you would have said Niska,” one unnamed chief says. “You said Nishga. With a sh sound.” Can belonging be created and destroyed in a breath in the middle of a word? In this context, the red H on the cover takes on a deeper significance: that superfluous letter inspires the stubborn hope of a new day.

Toward the end, Abel includes an open letter that further thwarts the exclusionary impulse of many: “This is a book for everyone.” And though identity is often a highly self-involved topic, his poetry does not fall into the trap of solipsism. While there is anger in Nishga, it doesn’t feel impotent or self-righteous, because it inspires. Pain can make us violent. It can also make us shrink in fear. Abel shifts the force of that pain, reprocesses it, and lets light shine into new spaces.

All things powerful crave repetition, including violence and hurt, but in Care Of, Ivan Coyote, like Jordan Abel, redirects that impulse to different ends. “This is what I know about stories: they can tear me up on their way out of me, but they rarely leave a scar,” Coyote writes. “I am healed in a way, just by the telling.” This memoiristic collection of correspondence gives voice to the pain, prejudice, and dehumanization that so many people in the wider LGBTQ community experience.

Painful experiences within the community are frequently the result of other people’s knee-jerk reactions and unexamined fears of collapsing paradigms. Coyote relates a number of unpleasant encounters, but one is particularly upsetting. Sitting in a waiting room, they hear their name called and stand up. The technician assumes there has been a mistake and says loudly to her colleague, “I certainly can’t do a vaginal exam on him.” Coyote has to gesture the technician into a hallway and explain that they’re transgender, that they have a vagina, that they need an ultrasound.

But the situation gets even worse. When it comes time for the actual procedure, the technician “literally would not touch me. She passed me the lubricated wand and instructed me to put it in myself.” Finally, after it’s done, Coyote asks for a tissue, at which point “she took a box of Kleenex off of the counter, tossed it on the exam table at my feet and bolted out of the door.” Maybe the technician was mortified at her mistake and reacted unprofessionally, but the behaviour is harmful. The intimacy and vulnerability generally associated with the medical space make the humiliation — in the waiting room and the exam room alike — all the more injurious. “How many microaggressions are there in a macroaggression?” Coyote asks. “I’ve always wondered.”

“All things powerful crave repetition, including violence and hurt.”

While the collected letters in Care Of speak to the experience of pain and violence, they do not dwell on it. Rather, they seek the necessary conditions for healing. How many micro-gestures of goodwill make up magnanimity? Of course, such generosity can be difficult to find, particularly for those who are trans: “Trans women, and trans men, too, and non-binary people like myself, have to conjure and create ourselves out of that very same broken and bleeding bone marrow.”

With Care Of, Coyote returns to familiar territory. Their memoir Rebent Sinner, from 2019, was constructed from stories, essays, and letters that frequently engaged with the antagonisms of trans-exclusionary radical feminism; their Tomboy Survival Guide, from 2016, traced a journey from childhood freedom to the corseting structures of adult gender norms. Five years later, some of those strictures may be changing. “I think there is a reason for the divide between generations,” Coyote writes early in Care Of. “I think these kids need to reinvent the possibilities for themselves.” Rather than focusing on the past, young people should “take what we fought for and won for granted, so they can make room to expect so much more than we dared to ever hope about. Then we can all inherit new language, more words, a better day.”

Coyote’s letters tell of familial estrangement and rejection, the discomfort of doctors’ offices, the danger of public washrooms, and the antagonism they sometimes experience even within allied communities. The letters also touch upon experiences that are familiar to just about any reader, regardless of their gender identity or sexual orientation: aging, generational friction, simple questions about life. Nonetheless, this is a book marked by a deep streak of optimism. In order to fashion and discover one’s self, a person must identify those markers that link them to something beyond. As Coyote puts it, “Trans was a word first and most commonly used in chemistry. So basically I am a chemical poem that means beyond. I am moving and changing.”

Nishga and Care Of are, ultimately, about shifting the centre of gravity away from the individual in isolation and toward community — that is, away from the exclusivity of purist notions of culture and identity and toward respect and inclusivity, or maybe something we don’t even have a word for yet. Something beyond.

Care Of is a record of correspondence and experience, yet in a moment of counterintuitive insight, Ivan Coyote suggests the need to ­forget — at least temporarily — what came before, so that one might imagine something different. Nishga, too, is an archeological undertaking that breaks the illusion of a closed, crystalline narrative governed by the triad of past, present, and future. Both are artifacts to be treasured in ­better days — evidence that cycles of violence can indeed be broken.