Spin Doctors: How Media and Politicians Misdiagnosed the COVID-19 Pandemic

On March 5, 2020, television broadcasts across the country flashed disturbing images of seniors locked down at Lynn Valley Care Centre, the North Vancouver facility that became an early face of the COVID‑19 pandemic. Here was British Columbia’s first case of community transmission and a warning that the virus would soon rip through nursing homes. The initial Canadian death was also recorded at Lynn Valley, during a two-month outbreak that infected fifty-two residents and twenty-six staff members and claimed twenty lives. Within a year, the novel coronavirus would kill more than 22,000 Canadians, the majority of whom were older and living in residential facilities.

The Lynn Valley ordeal shattered our complacency and shifted the focus of Canadian media coverage away from lockdowns in China and passengers trapped on cruise ships. But it did not lead to in‑depth reporting about the cracks in Canada’s social services that disproportionally affect the most vulnerable and marginalized communities. That’s what upset Nora Loreto, who found herself grounded in Quebec City as a stay-at-home mom during the pandemic’s early phase. The author and activist was particularly irked by the way so many — including poor, elderly, and disabled people — were essentially left to fend for themselves. Instead of delving into the depths of the disruption, she argues in Spin Doctors: How Media and Politicians Misdiagnosed the COVID‑19 Pandemic, many journalists simply parroted public health directives, reported official case counts, and treated citizens like, to borrow a phrase she’s used elsewhere, “a school of goldfish.”

Watching the spectacle unfold, Loreto was so full of pent‑up rage that she began tracking and collecting everything aired, printed, or posted about COVID‑19’s trail of death, despair, neglect, and fatigue. She was fascinated by the way reporters and pundits fell under the spell of regular briefings from the prime minister, provincial premiers, and previously invisible public health officers. Her resulting book exposes the collusion between those leaders and the mainstream media, identifies countless examples of skewed coverage, and takes aim at the corporate conglomerates, most notably Postmedia, for gutting newsrooms and thus rendering them unable to tell the full and unvarnished story. 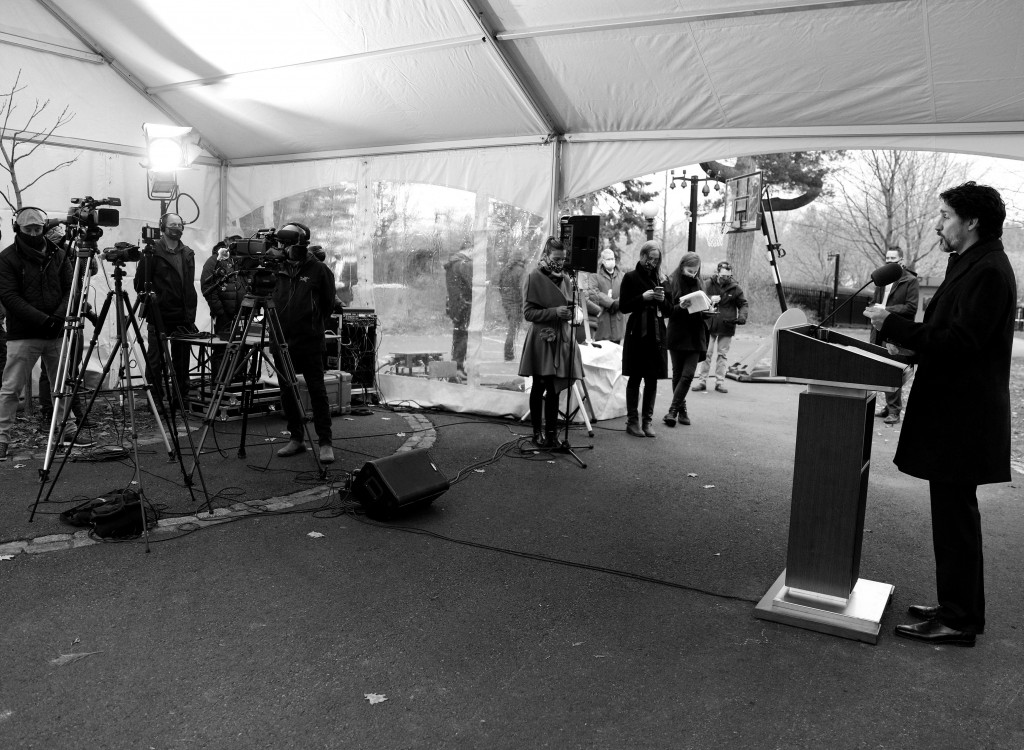 They shared a small tent.
Image by REUTERS; Alamy

Passionate, hard-hitting, and fiercely contrarian, Spin Doctors is sure to appeal to harsh critics of the Canadian response to COVID‑19 and to skeptics who have lost faith in both political leaders and public health officials. Consumed by recent rounds of job losses, Loreto serves up a scathing critique of the “media establishment” (basically everyone but alternative news sites) that takes the form of a diary-like retelling of the pandemic’s first year. In a crisis crying out for collective responses and approaches, she claims, politicians and journalists privatized the coronavirus by making it mostly a matter of “individual responsibility”: mask up, keep a social distance, and, in Nova Scotia parlance, “stay the blazes home.”

While the media is Loreto’s primary focus, the real strength of the book is in her thorough, meticulous analysis of the pandemic’s devastating but largely under-reported impact on residential care, food processing, and retail industries. She shines a bright light on workplace outbreaks, particularly a disastrous one at a Cargill meat-packing plant in High River, Alberta, where nearly half the 2,000 employees, mostly immigrants, refugees, and temporary foreign workers, tested positive. Praising essential workers as heroes made for good public relations, but the introduction of “hero pay”— an extra $2 an hour at many stores — left a sour taste when it was mostly removed just a few months later.

A sense of outrage and cries for social justice run through this book. Deaths and illness in long-term care were, according to Loreto, an especially clear result of neglect and negligence:

Residents confined to their rooms, rendered invisible due to age and disability, are the forgotten victims of this pandemic. They lived in the care of others, and those people failed to keep them safe. Where to place the blame was rarely clear, thanks to politicians whose direct actions made these residences so unsafe, and journalists who were either unable or unwilling to go deeper in how they wrote about this crisis.

When it comes to his early pandemic leadership, Loreto lets Justin Trudeau off comparatively lightly, perhaps because of his many updates standing outside Rideau Cottage and the generosity of his billion-dollar COVID‑19 spending. She argues that his blockbuster announcement on March 11, 2020 —“We can support you and we will”— focused “on economics alone” and “sent a signal to the corporate world that they shouldn’t panic.” In declaring war on the pandemic, the prime minister forged a “Team Canada” spirit and effectively muted opposition parties. Ottawa then mollified tens of thousands of people idled by shutdowns, who actually fared better on the $2,000-a-month Canada Emergency Response Benefit than they had in low-paying or minimum-wage jobs.

Loreto chronicles each month from March 2020 until March 2021 by focusing on a single topic: residential care, systemic racism, or media job cuts, for example. Every chapter opens with a running tally of COVID cases and deaths, which reach 817,591 cases and 22,017 deaths by March 2021. She shows in minute detail how public officials and an uncritical media fashioned a popular narrative that sustained the status quo, thwarted calls for structural change, and effectively glossed over the worst ravages of the crisis.

The book’s September chapter takes up schools, including the lengthy closures. Schools, Loreto claims, made for the “rhetorical heart of the pandemic” and attracted outsize coverage compared with long-term care and workplace experiences, because everyone shares the common experience of having attended one. She calls into question the actual risks that children faced in the classroom and the proportion of attention focused on educators’ concerns about class sizes and potential exposure. “How parents were feeling” dominated news stories, most of which were formulaic: starting with a personal anecdote, capturing parental anxieties, citing educator concerns, and containing a clip or two from experts, quite often the usual suspects.

A radical critic and the co-host of the Sandy and Nora Talk Politics podcast, Loreto sees the pandemic as another example of how neo-liberal policies and practices have failed society. The past two years have been, in her view, a lost opportunity to initiate large-scale change and tackle racism, misogyny, and other inequities.

While Spin Doctors is riveting, it also misses the mark by not capturing the entirety of the problem. The hollowing out of the mainstream media, including the shrivelling of newspapers, has weakened coverage, but alternative sources have helped fill the void, albeit through so‑called narrowcasting. What’s missing is independent investigative journalism that holds politicians, public health authorities, decision makers, and the media itself to account. By focusing so much on the industry’s job cuts, Loreto goes relatively easy on Canada’s panic-stricken politicians and public health officials. (In this way, her analysis is quite different than that of Barry Cooper and Marco Navarro-Genie, who argued in COVID‑19: The Politics of a Pandemic Moral Panic, published by the Frontier Centre for Public Policy in late 2020, that politicians and medical bureaucrats reduced many of us to docility by scaring us with infection rates, issuing public health directives, and limiting our freedoms.)

Readers looking for more on some of the dramatic changes in news coverage — public health messaging, ritual briefings, and reliance on instant medical expert celebrities — will be disappointed with Spin Doctors. There’s also surprisingly little on the dominance of big pharma and its profit margins or on the widespread obsession throughout 2020 with finding a magic bullet in the form of a vaccine.

The realities of COVID‑19 should spark much-needed rethinking of public policy, pandemic planning, and numerous social inequalities. And while Loreto’s claim that the ruling class was aided and abetted by the mainstream media and motivated more by money than by saving lives may apply to the major banks, grocery giants, and PPE profiteers, such rhetoric will not likely resonate with most ordinary citizens. Indeed, so much of Spin Doctors focuses on shooting the messenger that it’s no wonder the media establishment has, so far, brushed aside Nora Loreto’s criticisms.

Great review of Spin Doctors in the Literary Review of Canada. Take a read and then buy twenty-seven copies, please.