Querelle of Roberval: A Syndical Fiction

Kevin Lambert’s young age would be less noteworthy if he were not such a skilled examiner of depravity. His 2017 debut, Tu aimeras ce que tu as tué, was published when he was twenty-five (the text was translated in 2020 by Donald Winkler as You Will Love What You Have Killed ). The novel follows a group of dead characters — all killed in gruesome circumstances — who come back to life to destroy the author’s hometown of Chicoutimi, Quebec.

With his second novel, Lambert once again courts offence, extending his macabre purview to include cannibalism and necrophilia. Querelle of Roberval is, in the writer’s own words, “a pornographic, violent book.” Published in French four years ago, the narrative draws upon Jean Genet’s scandalous tale of a thieving bisexual sailor, Querelle de Brest, from 1947. Retaining the spirit of the source — the original author was prosecuted as a threat to public decency — Lambert transports Genet’s protagonist from the ports of France to a labour dispute in Canada.

The novel begins on a picket line in the small town of Roberval on the shore of Lac Saint-Jean, some 400 kilometres north of Montreal. There, twenty-one employees at the local sawmill join in a strike “for shorter workdays, more flexible hours, and paid breaks.” They all, however, bring their own ideologies and prerogatives to the bargaining table. 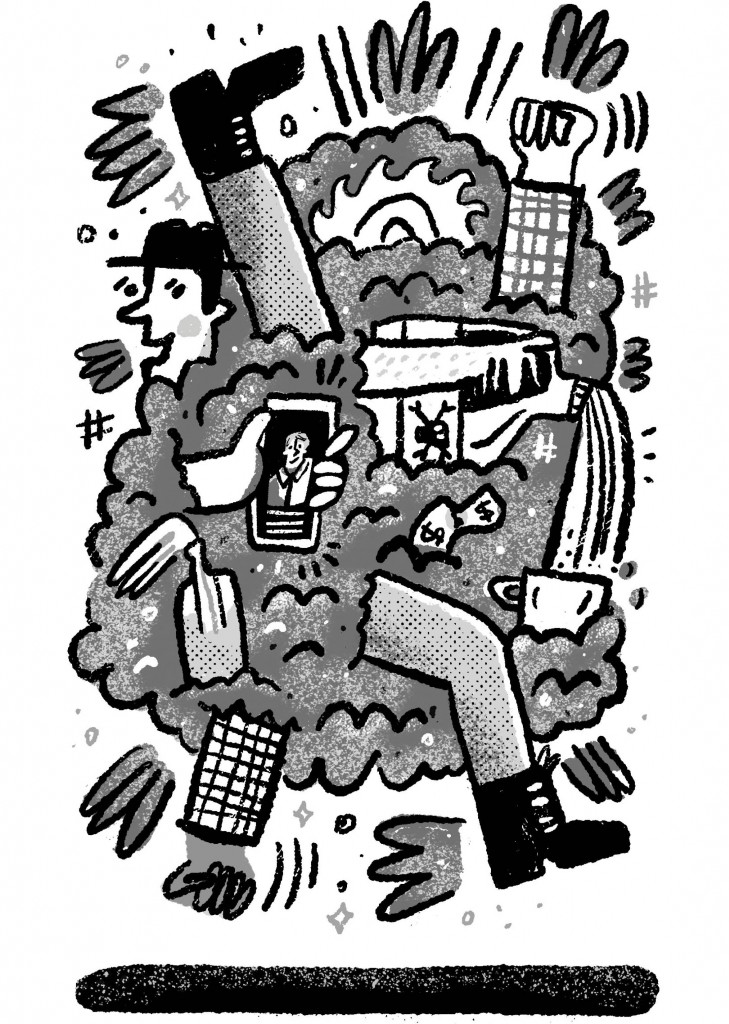 The cycle of violence escalates.
Image by Sandi Falconer

Lambert swiftly introduces this ensemble cast of workers, including Jacques, the factory’s firebrand union rep; Judith, an accountant who doubles as a mole for her employer; and her sister, Jézabel, a wood trimmer who is struggling to support herself. Their boss, Brian Ferland, holds a feudal regard for his staff. He arranges a hiring blacklist with other businesses to keep contracts precarious, and although he pledges to share the company’s profits with his team, he shows no sign of delivering on this promise. At the onset of the strike, Ferland attempts to corral his errant employees by serving them coffee spiked with bleach. Still, he believes he is “working for the good of all, for society.” Because of this, “he calls himself a socialist.”

Querelle cuts a distinct figure amid the labourers. Recently arrived from Montreal — where Lambert now lives — he is young, stunningly attractive, and openly homosexual. At first, he remains unengaged with the conflict, nodding along at union meetings and voting with the majority, sometimes while secretly pleasuring himself under the table. Querelle’s vocation is of a more carnal nature; he spends his off-hours combing through the dating app Grindr, and each night young men flock to him “in pursuit of their orgasms.”

Lambert portrays his protagonist as a sort of philanthropic Don Juan who liberates the desires of his repressed lovers: “You never get ravished like that twice in your life.” As the sawmill workers fight against “being shafted by an employer,” Querelle’s sensual exploits become increasingly daring. While the boys of Roberval are insatiably drawn to the queer Lothario, their fathers rage at the threat to the sanctity of masculinity. “Their sons are the product of a society on the road to feminization,” they rant, “bereft of reference points, being buggered by planetary biochemistry.” Meanwhile, the fathers penetrate each other on fishing and hunting trips, seemingly unaware of the contradiction. When a beating outside a bar fails to quell the libertine “bogeyman,” a mob ransacks Querelle’s home. It is not for nothing that his name translates as “quarrel” or “altercation.”

As the hostility toward the protagonist intensifies, so does the tension on the picket lines. After the coffee poisoning, the workers retaliate by breaking into the factory and sabotaging the equipment. The cycle of violence escalates further on Christmas Day when the strikers’ houses are targeted with Molotov cocktails. Despite months without pay, and even as local residents’ animosity to them grows, they remain resilient — that is, until Ferland takes it “upon himself to rip their strike to shreds and transform it into a lockout.” Betrayals quickly follow and one of the members commits suicide. Querelle rallies what remains of the embattled group for a brawl as the novel charges toward its merciless conclusion.

Querelle of Roberval was prescient when it was originally published, and its translation is timely now. Trade unionism has been experiencing a marked resurgence. Employees at Starbucks and Amazon vote to unionize almost weekly, and rail workers in the United Kingdom and Canada recently held newsworthy strikes. Lambert avoids idealism in his portrayal of job action, however. The demonstrations are “a response to aggression,” as the union representative Jacques puts it, “that which has been organized by high finance, immigration, and the environmentalists.” Their movement is populist and reactionary. After all, the Scierie du Lac factory is involved in a resource-extraction industry that operates with disdain for environmental protection and little regard for Indigenous rights.

At no point during the brutal course of events does the author condemn his characters. Instead of focusing on their faults, he directs his criticism to the broader system, probing the social, linguistic, and financial divides between Quebec’s urban and rural areas. “Montrealers live in their own bubble,” Querelle cautions at one point. “They think they’re the centre of the world and know nothing about what life is like for workers in the regions.” Of course, as he doesn’t come from the town, his colleagues are suspicious of his support for their cause.

Although it is committed to social analysis, Querelle de Roberval is never dull nor didactic. As the plot is propelled forward by the conventions of a Greek tragedy, the prose is pitched toward the figurative and the poetic. The text — which won France’s Sade Prize in 2019 — is also well served by Winkler’s translation, which preserves what Lambert calls his “rhythmic sense” as well as his irreverent sense of humour.

The book is grotesque enough to shock even the steeliest of readers, but at no point does it register as mere sensationalism. A comparison can be made to the work of Bret Easton Ellis, another early starter with a penchant for the abject. Like Ellis’s novels, Lambert’s excavation into the depths of desire and provocation is as thrilling as it is disturbing, as beautiful as it is revolting. This is a difficult balance to manage, yet it may well be the key to his success.