It’s the summer of 1929, and the trip from Montreal to Vancouver is supposed to take just four days. This is “the fastest train across the continent,” the porter Baxter says repeatedly. But as with most journeys, there’s a delay. Four increasingly wearisome days stretch into six eternities.

The plot of The Sleeping Car Porter, Suzette Mayr’s sixth novel, obeys competing temporal and moral laws. Rigorously standardized railway time is indicated directly and corresponds to strict rules of comportment: “9:00 p.m. Baxter sets out his step box, uniform smart, all the gold buttons securely sewn and gleaming.” Reflective spells, on the other hand, interrupt the staccato narration and anticipate a breakdown: “Baxter has travelled this run once before. He’ll come close to truly cracking in half somewhere between Regina and Moose Jaw, the gagging and uneasy stomach from lack of proper food and sleep.” Exhausted and demoralized since the start of the trip, Baxter tries to keep awake and to keep time. He measures his daydreams in poppy seeds, fruit flies, and thimbles; his job in the hours that remain until the destination; and his fate in demerit points, dollars, and cents.

Mayr’s style is lively and pliant, but some plot devices seem unmotivated. For example, it’s not clear why Baxter — a young, queer, Black man “born in the tropics” and known for his penchant for “scientifiction” and his talent for seeing what he shouldn’t — wants so desperately to become a dentist. All we know as readers is that, after he found “an abandoned dentistry textbook” eight years ago, “a bonfire blazed inside him” and that he now registers everyone’s dental peculiarities. He spots a decaying molar and wants to extract it. An older woman’s supernumerary teeth fascinate him. More than once his physical desires translate into lingual exploration of a lover’s incisors and bicuspids. Often, though, the conceit feels heavy-handed. “Teeth make so much more sense than people,” Baxter muses. “When teeth trouble you, you extract them. Roots hanging, splayed in the clutches of your dental pliers. The rot eradicated.” 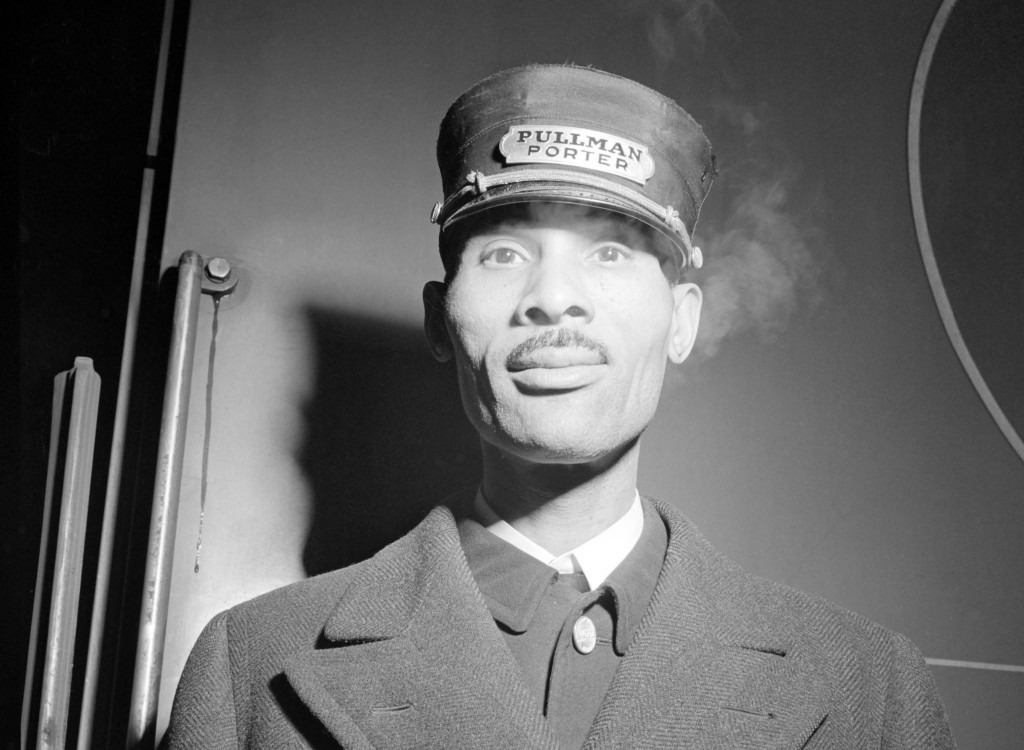 A railway porter and his apparitions.
Image by Jack Delano, 1943; Library of Congress

Another iteration of Baxter might have had different aspirations — perhaps writerly ones. He’s certainly adept at telling fictions (keeping his job often depends on it). Like Scheherazade, he can save himself with the promise of a strange tale from a book he’s reading. “If you let me go,” he says to a wailing child named Esme, “later I’ll tell you the story about a golden beetle from Jupiter who eats humans.” Distracted, curious, and suspicious, the girl asks him, just before she slackens her grip, “Why would a beetle do that.”

Esme says the quiet part out loud: individual motives are often unclear or hidden. Baxter must constantly watch for disguised “spotters,” who are ready to punish him for something he did or did not do. Other passengers, “those nasty types,” might want to use him as “an alibi or witness” to some deed planned or already executed. But a few characters have benevolent aims. Small extensions of unexpected generosity add plot twists and shake the foundations of an otherwise intransigent and prejudicial system.

To pay for dental schooling someday, Baxter has to take whatever gigs he can get, and he is terrified of revealing himself to be anything but an upstanding employee. When he finds a copy of a pro-union publication, The Messenger: World’s Greatest Negro Monthly, he gets rid of it as quickly as possible. And when passengers get to be too much, he takes inspiration from his sci‑fi novels: “Click, thinks Baxter. He is a clicking Robot, created to serve.” Mayr’s sense of humour (“click” brings to mind another single-syllabic expletive ending in “ck”) and her ability to convey stifled frustration conspire to create this magnificent sentence: “He is an automaton click click clicking hands clicking teeth clicking feet click click click clicking knees clickety clickety click.” No exclamation point — the repetition and italics say it all.

But the young porter isn’t just struggling with other people’s hostilities. Underfed and drained from hypervigilance, he lives with hallucinations — or perhaps they’re ghosts. Baxter calls one of his visions — a kind of self-projection — the “figmental man.” He spots him here and there in small spaces, “curled and shivering in a ball even though he glows like a coal on a fire.” Initially, it seems these apparitions are the porter’s alone, until a rather odd passenger (a spiritualist who holds seances on the train) offers, unprovoked, “I see him too.”

Mayr’s novel speaks to contemporary sensibilities. Not so long ago, a Black porter would have appeared only in the background of a story, unseen. But then came Cecil Foster’s They Call Me George: The Untold Story of Black Train Porters and the Birth of Modern Canada, in 2019, and now the CBC is airing a television series that dramatizes the events that led to the formation of the Brotherhood of Sleeping Car Porters, the first Black-led labour union.

This book tells a very different story. After all, Baxter jettisons the old copy of The Messenger he found. With its introspective narration, the novel brings to mind a much earlier work: Gerhart Hauptmann’s Lineman Thiel. That 1888 novella tells of a railway worker who, like Baxter, struggles with fatigue, temporal confusion, and disturbing visions. (Is Mayr nodding to Hauptmann’s character Minna when she names the conductor’s wife Mina?) But where the German tale ends in tragedy, The Sleeping Car Porter concludes by envisioning a society that dares to acknowledge its ghosts. Maybe that’s the next destination.