How surely, in some future day, when the memory of it shall have lost its vividness, shall we half believe we have seen it in a wonderful dream, but never with waking eyes!
— Mark Twain

Rain and fog were still there that Saturday morning not long ago; they had arrived two weeks prior, and the upcoming ten-day forecast looked no better. We had planned and prepared to hike the 120 kilometres from Iqaluit to Kimmirut just as Nunavut’s capital, which had declared a state of emergency after a very dry year, recorded more precipitation in fourteen short days than it had all summer. My new binoculars, ordered from Mountain Equipment Company, arrived by plane in the fog. I watched a polar bear safety video in the fog. I made a very dry egg sandwich to be eaten in the fog. Now the six of us slid our eighteen-kilogram bags and ourselves over the cabin of a bright yellow boat in the fog. As we headed toward the western shores of Frobisher Bay, we turned back and watched as the Road to Nowhere, then the small-craft harbour, then the deep-sea port, still under construction, all turned to grey. We rocked back and forth, and the trailhead slowly came into view.

The clouds spread apart a kilometre after we passed the first of nine emergency cabins. We gained elevation and breathlessly told jokes: What do you call cheese that isn’t your cheese? Nacho cheese. What’s a door’s favourite container? Ajar. I had just watched that episode of The Simpsons where Marge admits that she always ruins knock-knock jokes, because whenever someone says, “Knock, knock,” she always yells, “Come in!” Slowly, the tension of hiking north of the sixty-second parallel in constant drizzle eased as our layers of down feathers and fleece dried in the sun. Those nicer conditions lasted for the next three and a half days. We crossed thigh-deep rivers in our underwear, then drank from them, leapt through rock gardens, gazed at lakes from the tops of hills, and camped beneath aqsarniit, or the northern lights, which we knew were dancing above us even though we were too exhausted to stay awake and watch, save for once.

The weather turned one evening with a storm that blasted 100-kilometre-per-hour winds against the walls of an emergency cabin the size of a camper van, which we had crammed into earlier that afternoon. On our most gruelling day, we hiked twenty kilometres — not quite a half-marathon — traipsing through the elements as soft tundra sucked at our feet. Patches of grass served as precious islands in a marsh, and we avoided the rest as if it were lava. 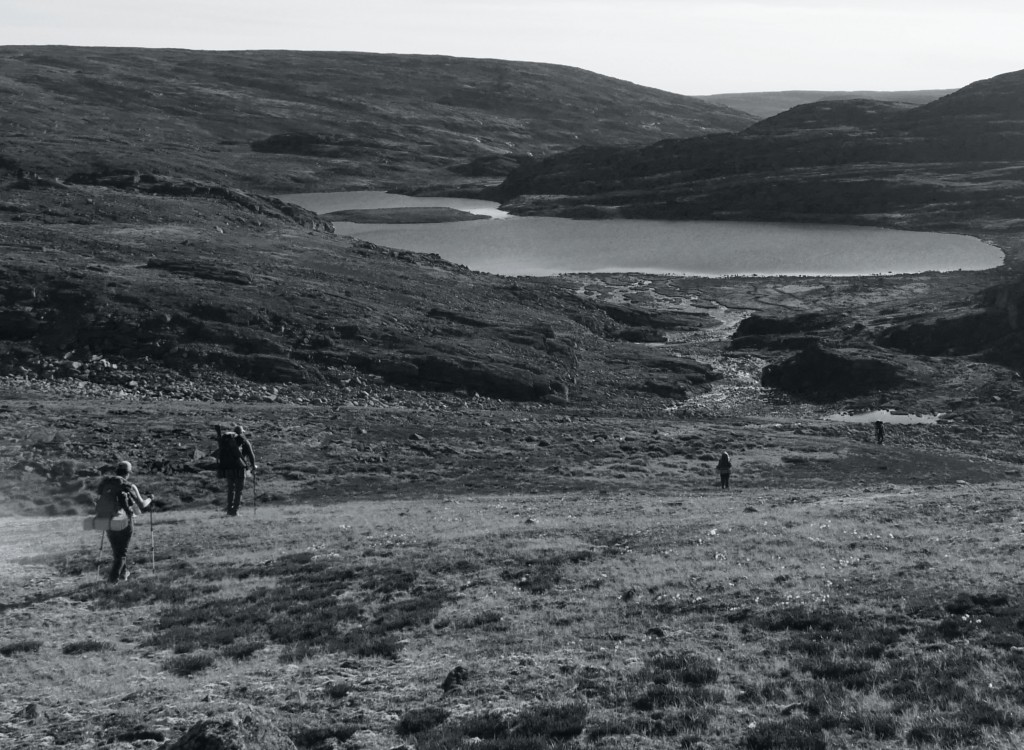 Shortly before setting up camp along Nunavut’s Itijjagiaq Trail.
Image by David Venn

There’s a beauty to it all, of course: seeing how the land can replenish itself, stumbling upon waterfalls that drop from a low ceiling, passing thickets battered by the wind, knowing they’ll be stronger for it. Once, I stopped still as a caribou charged toward our group’s leader, only to veer right at the last moment. We supposed it was protecting its young, like the peregrine falcon that had shrieked at us from a cliff.

At a certain point, we began to loosely trace the Soper River, or Kuujuaq, toward Pleasant Inlet and into town. But most of the trail is a rather undefined path. You follow your gut and a GPS unit that doesn’t know when the weather has just transformed a crossable creek into an impassable obstruction. You can tell you’re getting closer to Kimmirut when willows creep up from your shins to your waist and people on ATVs start passing you with fishing rods. That’s when memories of a very dry egg sandwich give way to the possibility of a fresh one in the very near future — this time with more sriracha.

Inuit and Thule have been traversing what’s now called the Itijjagiaq Trail — Itijjagiaq meaning “over the land”— for centuries. That wasn’t lost on us as we carried on across Baffin Island’s Meta Incognita Peninsula. The route cuts through Katannilik Territorial Park — from the Inuktitut for “place of waterfalls”— which is also home to such wildlife and vegetation as rock ptarmigan, Arctic hare, snow buttercups, Arctic poppy, and purple saxifrage, to name a few. Most mornings, I’d wake up and pick a few crowberries and blueberries for my oatmeal; some afternoons, when my back allowed it, I’d bend over to pick some more as a snack along the way. In fact, the 1,200-square-kilometre park is a berry-picking hot spot each fall and, when there’s enough snow, a Ski-Doo highway between Iqaluit and Kimmirut. The annual Toonik Tyme festival takes place every April, and one of the events is a point-to-point snowmobile race. It can take competitors about three hours to finish. It took us closer to a couple hundred.

As the Kenn Borek Air Twin Otter took off from Kimmirut’s ramped gravel runway, among the shortest in Nunavut, I reflected on both the joys and the discontents of our trip: nine mornings of gingerly sliding feet into the same cold, damp, smelly socks; shoving them into wet boots; and trudging along with sore knees and blistered arches and five others who willingly shared in the satisfying misery, because maybe it builds character, maybe we’re all masochists, maybe the many wonders of a land most Canadians will never see make it worthwhile. Or maybe there’s just something about walking down a hill then up a hill and then down a hill and then up a hill, only to get further from the place you’ve been and closer to a place you’ve willed yourself to be.

I watched the hamlet — our destination for so long — slip away into the tundra. From the air, on the half-hour flight back to Iqaluit, some of us spotted the safety cabins along the trail. As Mark Twain and his fellow passengers aboard the Quaker City once did, we bid everything farewell, “possibly for all time.”

David Venn is a reporter for Nunatsiaq News. He lives in Iqaluit.