Since I am an inmate of what Michael Keren calls “blogosphere” in his book of the same name—those of us therein call it “the” blogosphere, but Keren disdains definite articles, among many other things—I was a natural candidate to approach for a review of this 165-page, um, book. After all, like all residents of the blogosphere, I live in my mother’s basement and wear pyjamas all day. (There is even a name we give ourselves: the pyjamahadeen. It fits.)

Squatting here in my favourite Barney jammies, then, swilling fizzy pop and consuming Cheetos by the metric ton, I find myself—uncharacteristically for a certified (and certifiable) member of “blogosphere”—at a loss for words. Bloggers have opinions on everything and anything, from politics to economics to the latest dispatches from the Lindsay Lohan wars. We are many things, but speechless is rarely one of them.

But sitting there on a chair beside me is the University of Calgary professor’s book. Its cover actually features a space alien, with spidery fingers and bulbous eyes, something straight out of central casting at The Twilight Zone, making abundantly clear what Keren thinks of the pyjamahadeen even before you crack the spine. Mocking me. Taunting me. Daring me to describe it.

Michael Keren’s Blogosphere: The New Political Arena is abominable and atrocious. It is more than that. It is awe-inspiring in its awfulness. It is a stinking, fetid heap of ill-informed, ill-considered, atrociously written shite. It is not the worst book ever written, probably, but it is in serious contention. If you buy it, or even permit yourself to be photographed holding it, you are crazier than the pyjamahadeen Keren clearly loathes so much. You need help.

But that, paradoxically, is what Keren thinks of the bloggers—to wit, that they are all unbalanced and need help. Presidential and prime ministerial candidates, artists, clerics, soldiers, academics, musicians, writers of every description: Keren thinks they—we—are unhinged, unbalanced and highly unusual. For those unlucky enough to somehow make it to the tail end of Blogosphere, the feeling becomes decidedly mutual.

But before I tell you what I really think of Keren’s book—before we get to the pith and substance of the review, as it were—a bit of background is in order. What, precisely, are blogs and bloggers and the blogosphere?

Well, first things first. Definitions are important, and—in my view—so, too, are blogs. In a poll a couple of years back, the respected Ipsos-Reid research firm attempted to define these wildly popular web logs, or blogs. Their definition: “web pages with minimal to no external editing providing online commentary that are periodically updated and presented in reverse chronological order, with hyperlinks to other online sources. [Blogs can also] function as personal diaries, technical advice columns, sports chat, celebrity gossip, political commentary, or all of the above.” Sounds about right.

Others have a simpler definition. A scribe at a New York paper once memorably called the internet “a vanity press for the deranged.” To Keren (and others, to be fair) that sums it up, pretty much.

The modern communications environment is digital, difficult and double-quick. To survive in it—to thrive in it—you need to be modern, too. It’s essential. And that is why political parties and corporate entities and NGOs have embraced the internet and its progeny with a vengeance, blogs in particular.

But why, you ask? And, while we are on the subject, who are the guys behind these blogs? (And they mainly are guys.) Well, a 2004 M.I.T. study looked at 500 bloggers in nearly 40 countries, and found that nearly 65 percent were male—and that about 60 percent had a college or university education. Nearly 80 percent were white, and most of them were pretty young—with the vast majority landing somewhere between the ages of 21 and 40. Most of them had been at the blogging game for a couple of years. Some less, some more.

Okay. So there’s a bunch of well-educated young white guys wearing jammies, pecking away at computers in their mothers’ basements. So what? Does anyone actually admit to reading what these pyjamahadeen are writing? Does anyone care? Well, um, yes, according to Ipsos-Reid’s pulse takers. In their aforementioned 2005 study, they found that blogs seem to be most popular among those with high household incomes ($60,000 or more), men (48 percent, versus 35 percent among women), younger adults, and—again—those with post-secondary education. A marketer’s (or a politician’s, or a war roomer’s) dream constituency: educated, affluent, engaged. And it is growing all the time.

But it gets even more fascinating, fellow Luddites. Ipsos-Reid concluded that about half the folks who are online have read blogs. Among those who have read them, an incredible 60 percent believed blogs influenced public opinion, and four in ten thought they helped to shape mainstream media, politics and public policy, too. Another four in ten described the blogger content as “accurate”—and fully half said they trusted the content of these websites either somewhat or a lot.

Why is any of that a big deal? Simple: because pollsters have also concluded that the mainstream media don’t have that kind of popularity anymore. Because the traditional news media is being read, or viewed, less and less. And because the old-fashioned media—newspapers, radio, TV—are no longer considered all that trustworthy.

One of the many ironies here is that citizen media and internet-based advocacy—in a blog, in a podcast, on one of the social networking sites like Facebook—is, like diary writing, essentially a personal activity. It was not conceived to be a competitor to mainstream media (although, in some respects, it has turned out that way). Some bloggers write about their lives (usually under a pen name) in an intensely personal way—saying things online they would never say to friends and family. While they often secretly wish they had as much influence as mainstream media people, most sensible bloggers know that they don’t. With very few exceptions, no single blogging voice can have a noticeable political, economic or social impact.

Why? Well, for starters, because there are simply way too many blogs out there. Technorati, the helpful web service that tracks blogs, estimates there are more than 60 million worldwide, with a new one being created every second or so. In a media environment as crowded as that, getting noticed is virtually impossible.

But there is another reason why blogs, bloggers and the like are unable to change the march of history, in the way that the traditional, mainstream media sometimes do—and it is because the new citizen media is horizontal, not vertical. That is, blogs and their ilk form an anarchic, leaderless, disputatious media community. They don’t organize themselves in the way that corporations or unions or governments do. They are not hierarchical. On their own, they don’t possess the agenda-setting clout of, say, a network TV news anchor. Working together, however—working as a unified, organized community, which is usually a lot easier to say than to do—bloggers can actually topple a network TV news anchor. (Ask Dan Rather, who was taken down by conservative bloggers angry about a sloppy story he broadcast about George W. Bush’s war record.)

The advent of citizen media—because that is what it truly is, average citizens seeking to contribute to, offset or even replace the traditional corporate media—is arguably the third great communications revolution (the first being the development of the Gutenberg printing press, the second being the popularization of television as a mass medium). Mainstream media types who sniff that it’s a fad, or unimportant, are just plain wrong, in my opinion. They don’t get it. They should. Citizen media is changing politics, business and social interaction. It has the potential to change everything.

That, at the end of this rant, is why Michael Keren’s Blogosphere book is so truly awful. Throughout the vast swaths of leaden prose, Keren sounds an awful lot like the mammoths did, perhaps, dismissing the possibility of the Ice Age.

He’s nasty, too. Bloggers “suffer from acute self-aggrandizement,” he writes. Bloggers “are not virtuous but vicious,” he proclaims. They are solipsistic, and “lack clear frameworks of social obligation and political responsibility.” They “resort to escapist and delusional substitutes for problem solving.” They are “cults” and—my personal favourite—“like terrorists.” And so on and so on. It is endless.

Bloggers, believe me, are a caustic, nasty lot with a surplus of opinion and (frequently) a factual deficit. They get facts wrong, and some of their opinions are profoundly dumb. In this way, however, they closely resemble the mainstream media, university academics and the writers of books.

It is Keren’s pious dismissal of every blog and blogger—particularly when coupled with his breath-taking inability to accept that bloggers can, and have, done some good—that renders this book an unmitigated disaster. Two examples that prove him wrong: in 2006, Virginia senator George Allen went down to a richly deserved defeat when he called a non-white Democrat worker a “macaca”—a racist term meaning “monkey.” Allen’s slur was captured on a cellphone video camera, uploaded to YouTube and seen by hundreds of thousands of people. The citizen media caught what the mainstream media missed.

Earlier, in 2002, Republican senator Trent Lott blew his career to bits when he gave a speech that suggested a wistful longing for racial segregation. Liberal bloggers went after him with a vengeance, forcing the mainstream media to cover a story they had previously ignored.

There are other such occurrences, but Michael Keren is not interested in them. His thesis, such as it is, seeks to denigrate anyone and everyone involved in what is—truly—one of the great new communications revolutions. It is a revolution that has helped to expose racists, drawn attention to a few injustices and given a voice to many who were previously voiceless. It has done some good, in other words.

Sure, we may all be down in our mothers’ basements, swaddled in flannel jammies. But we’re not nearly as horrid as the professor would have you believe.

His book, meanwhile, is.

Warren Kinsella blogs at www.warrenkinsella.com and is the National Post’s media columnist.

Re: “The Rise of the Pyjamahadeen” by Warren Kinsella

Re “The Rise of the Pyjamahadeen,” by Warren Kinsella (September 2007), quite frankly, what I found disquieting about Kinsella’s review were not the profanities, understandable in light of his adolescent approach to a study of blogosphere as a personal threat, but his striking lack of intellectual integrity, as if the LRC has been designated as the next pillar of the “anarchic, leaderless, disputatious media community,” better known as “citizen media.” 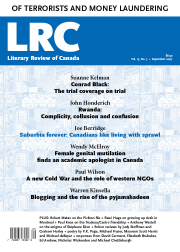