Bone sharp is a 19th-century term used to describe paleontologists. Its use in the title of Edmonton writer and poet Tim Bowling’s third novel is both a descriptor for Charles H. Sternberg (1850–1943), its fossil-hunting protagonist, and a metaphor for the emotional dramas that unfold in the story. Sternberg was an American who searched for dinosaur fossils in Alberta during the early part of the 20th century. For the most part the novel is set in the badlands of the Red Deer River valley during World War One, but this historical and geographical terrain is contextualized by a deeper sense of time and environment that comes from the fossils themselves.

The story begins with a description of Sternberg’s grief over the loss of his daughter Maud, who had died some years earlier. Maud is reincarnated as Lily, a young member of the expedition, who is in love with Scott Cameron, a protégé of Sternberg’s, who is absent because he is fighting in Europe. At one point Lily discovers a small skull and this symbol of death becomes the meditative point of contact among her, Sternberg and the young man in Europe. The unfolding of the “history” of the skull becomes the link between the three main characters and their memories.

Sternberg had self-published several memoirs of his life’s work, including Hunting Dinosaurs in the Bad Lands of the Red Deer River, Alberta Canada in 1917, in which he described his dream of taking Maud on an imagined tour of the Cretaceous Period and its amazing creatures. Today we would call it creative non-fiction. For readers of The Bone Sharps, an excursion into Sternberg’s memoirs can be enlightening (Hunting Dinosaurs was reprinted by NeWest Press in 1985). Bowling was fortunate to have Sternberg’s writings as a source for the paleontologist’s voice. He does well in capturing that voice, although it is not always appealing. The completely invented characters, Lily and her boyfriend, have voices successfully constructed out of the novelist’s repertoire that are not bound by historical sources.

Lily’s anxiety over Scott Cameron’s fate allows Bowling to recreate the horrors of trench life (and death) in a bittersweet contrast to the solitudes and silences of the Alberta badlands, where the expedition is working. Cameron languishes in the mud-filled trenches with a copy of Sternberg’s 1909 Life of a Fossil Hunter, which is renamed in the novel as My Life in the Bone Yards of the West. Bowling’s descriptive powers are formidable in their prose poetic intensity.

Not me, it won’t be me, and the long, held stare at the dead men as if to hear them answer the question you haven’t asked about death because you don’t really know it, muscles tensed at the parapet, in the listening posts, on sentry, head down, lice in your fingers, their blood your blood, crack crack, like a tiny shell just invented …

He plays with historical time (1916), flashbacks (1876), flash forwards (1975) and location (Alberta, France, Montana) in a montage of literary spaces. In 1975, for example, Lily is 80 years old (making her 21 in 1916) and she has just lost her husband. She decides to return to Alberta the small skull she had excavated in 1916 in a symbolic act that intertwines life and death. She wants to restore to the earth what she took from it, a restoration that has been foreshadowed by a similar reburial Sternberg was forced to do in Montana in 1876 by Native Americans. The characters are constantly harking back or returning in their minds to previous times. Sternberg thinks back on his daughter, Cameron thinks back on his childhood and, now, Lily thinks back on that fateful summer. Each and every one is an archaeologist of his or her own soul. Bowling considers memory the prime tool for breaking down the border between the living and the dead, the border between the fossil and its hunter.

The play of memory, where all our skeletons are buried, becomes the shadowy reality that touches every one of the main characters in the novel. They are all displaced, just as the dinosaur bones they dig up are, and they all seek a return to a comfortable home, where what is dead becomes alive again. The juxtaposed and varied chronology that Bowling uses to impart a sense of contrasting places remains connected and somehow unified, although sometimes thinly so. This method augments the differing voices that he gives his trio of characters in different phases of their lives. While Cameron’s voice has a narrative strength, Sternberg’s is less effective simply because of its devoutness and formality, a tone that is archaic to our ears. Lily, on the other hand, maintains an ethereal presence like a muse who intuits the importance of things to which men are blind.

Another key motif in the novel is textuality—first the play between fiction and nonnfiction present in any historical novel based on real people who have written their own memoirs and, second, the contrast between the physical world and the textual world. Bowling’s use of texts in the world of his characters is clearly symbolic. Text in the form of books and letters quoted in the novel provides an emotional softness that contrasts with the “bone sharp” universe of skeletal remains and their seeming importance. We are caught, the novelist suggests, between the material hardness of bones and the immaterial softness of words that frame the human body and its persona. Text is one polarity that has meaning for us, while physical objects are the other—the skull versus the letter. Text becomes the privileged reality.

While the novel has its flashes of brilliance, both stylistically and philosophically, it tends to be drawn out to read. In particular, the section on Sternberg’s early experiences in Montana could have been pared down. Also, the disjointed movement from character to character, location to location, one time period to another is initially attractive, but becomes disruptive to the point that the reader eventually feels jolted from scene to scene. The overall continuity that is created by the author is there, but it seems more literary than real. A good example of this is the culmination of the novel, which is written with great power and craft, but which portrays an unreal mystical union of life racing to meet death that leaves the reader impressed with the stylistic achievement, but somehow dissatisfied with it as an ending.

Bowling is poised to become a successful and highly praised novelist. All the indications are here. However, there may be a wait of one or two more novels before he achieves this status. This novel about bone sharps only points the way; it does not signal arrival. For a counterfoil to Bowling’s attempt at explicating the mystery of dinosaur country one might reread Robert Kroetsch’s 1975 novel, Badlands, which covers the same territory, but more succinctly. Another case of intertextuality.

George Melnyk teaches Canadian studies and film studies at the University of Calgary. 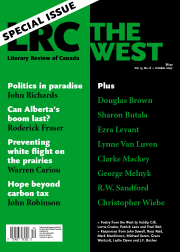