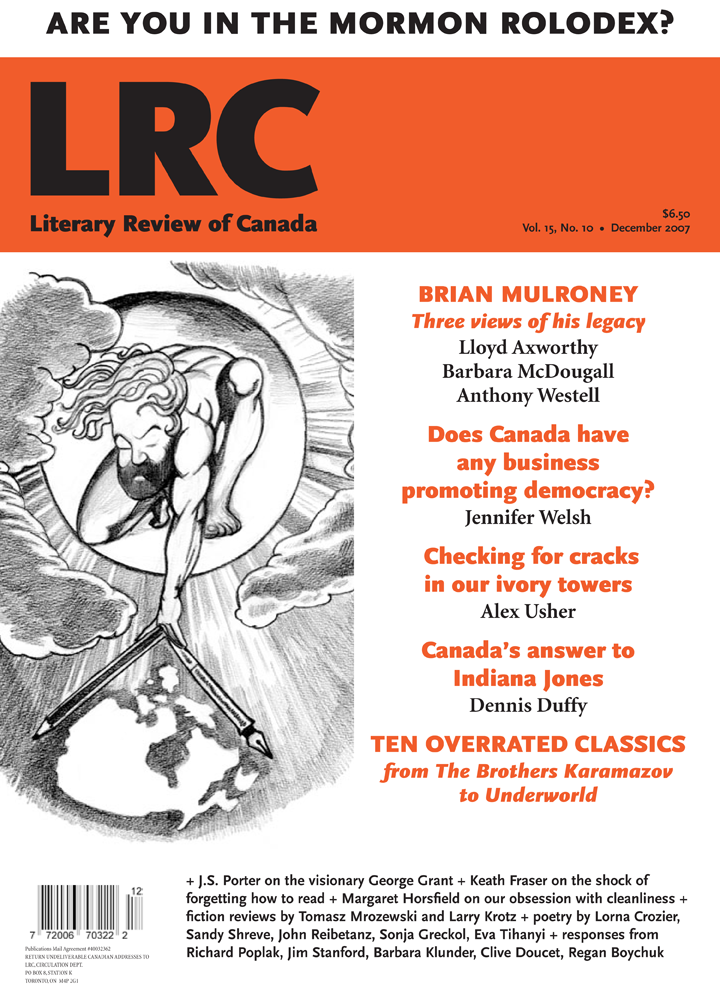 As chair of the Standing Committee on Foreign Affairs and International Development, I appreciate Jennifer Welsh’s acknowledgement of the bold innovative vision behind the committee’s recommendations and the case that Canada can do more and better in this field (“Promoting Democracy Abroad,” December 2007).

The committee, in its use of extensive testimony, fact-finding missions and thorough review of the critical literature, was fully mindful at the same time of potential pitfalls and obstacles. Strongly arguing for addressing knowledge and evaluation deficits, we did not claim to have all the answers. We did hope to advance the debate and Professor Welsh’s thoughtful review, as well as the positive response of the Government of Canada released on November 2, 2007, is evidence of having some success in that regard.

I would caution against reading too much or too little into the report. The assertion by some that the committee wants to centralize everything under one big new institution is contradicted by others’ complaints that our proposals would only result in institutional proliferation. Both interpretations are wrong. Fortunately, the government understood our intentions in its carefully considered response.

Of course, we knew that the idea of creating a new independent foundation for international democracy support would be controversial, even though it could serve as a needed knowledge centre and as a funder for worthy initiatives in underdeveloped areas, including a multi-party development component that would only be established with all-party approval.

Welsh does recognize the parallel with the arm’s-length International Development Research Centre established almost four decades ago. IDRC’s work is clearly seen to be both in the Canadian and global long-term interest. IDRC is a Canadian institution operating internationally to Canada’s credit. Why can we not do the same for advancing democracy?

Welsh worries we may be too concerned about furthering Canadian foreign policy objectives. The IDRC example shows how these can coincide with internationalist goals. Far from neglecting the multilateral dimensions of democracy support, we were impressed by the contributions Canadians are making through institutions based in other countries. But we also heard from them about their frustrations in being underutilized by Canada.

In responding to the committee’s report, the government has announced important actions and will commission an expert study to ensure capacities exist “to deliver effective, high-quality and responsive democracy support.” Welsh concluded that calling for a new Canadian body now was putting “the cart before the horse.” We will be satisfied so long as what emerges is a substantially improved cart with enough horsepower to pull it.

The most convincing argument for democracy promotion, according to Jennifer Welsh, is that it “emerges from Canadian values.” I agree that democracy helps define who we are as Canadians. But what really makes democracy promotion so appealing is that it combines our ideals and interests in one and the same policy. In this way it is much like economic aid. While doing good, we also make the world a safer place for Canadians. This line of argument bothers Welsh but it bothers me much less. There is nothing wrong with enlightened self-interest.

Even so, what makes democracy promotion so tricky is that our ideals and interests sometimes run in opposite directions. Leaders who talk up democracy while meeting with dictators (as they sometimes must) run the risk of appearing hypocritical. How does a Canadian prime minister roll out the carpet for China’s tyrants while continuing to insist that we are really backing the good guys, the democrats? It is important here to getthe message right. I would suggest something like the following subtext to any such meeting: “We’ll meet with you but we’re also backing your opponents.” Hitting the right note will require a finely tuned ear but it is something the Canadian public wants to hear, even if, as Welsh rightly notes, for domestic political reasons it can’t be cast in the American idiom of “freedom” and “liberty.” (By the way, isn’t it a shame that we can’t speak those beautiful words just because they constitute part of the American creed? Maybe we should just get over it and use them anyway.)

Backing the good guys means casting aside absolute notions of sovereignty. Democracy promotion implies not only supporting civil society and the rule of law abroad but also doing so with the intention of destabilizing dictators and siding with the democrats during transitions to democracy. Canadians, so long focused on the United Nations, an organization set up to promote peace, stability and national sovereignty rather than democracy, have been prepared for this new doctrine by changes already articulated under previous governments—by the Responsibility to Protect and the war in Afghanistan.

So much for doctrine. What about practice? Policy makers would do well to read Welsh’s thoughtful article, even if they reject its conclusion. Welsh is highly dubious of the report’s call for a new umbrella organization for promoting democracy. Little value added will be found, she maintains, by centralizing the efforts of the many ministries, agencies and organizations in Canada already doing important work in promoting democracy. Yet I’m not so sure that Welsh has captured the spirit of the recommendation. Reading the dissenting opinions (written by the NDP and the Bloc Québécois), it is all too clear what the status quo would be: avoid democracy promotion altogether or, better yet, use it to puff up the budgets of already existing programs. With few exceptions, however, these programs are housed in agencies and ministries whose primary function is not democracy promotion. The results are apparent enough. Translating doctrine into responsible and coherent practice requires creating precisely the umbrella organization that Welsh rejects.

Jennifer Welsh’s lucid and informed analysis of the House of Commons Standing Committee on Foreign Affairs report on international democratic development provides a balanced take on a policy often associated with Washington Republicans. Of course, the idea of democracy as a universal precept precedes the neo-cons by some decades—think Eleanor Roosevelt and the Universal Declaration of Human Rights, which declared in 1948 that “the will of the people shall be the basis of the authority of government.” As Welsh notes, Canadian values, particularly a belief in good governance based on the consent of the people, compel us to place the ideal of democracy near the top of the foreign policy pyramid. My only quibble with the author, a fellow expatriate Canadian, is that her vision of Canada’s role in democratic development is too Canadian in its modesty.

Significant numbers of Canadians are employed or associated with the Washington-based National Democratic Institute, International Republican Institute, International Foundation for Election Systems and National Endowment for Democracy. In the multilateral realm, Canadians help manage the United Nations Democracy Fund and the UN Election Assistance Division, and there are Canadians working on democracy issues at the Commonwealth, the Organization of American States and the Organization for Security and Cooperation in Europe. The committee suggests repatriating some of this talent.

Welsh argues that Canadians need not be attached to a particular organization, based on Canadian soil, to serve Canadian objectives. Maybe, but as it stands, the efforts of Canadians abroad contribute to the strengthening of foreign institutes’ initiatives and other countries’ foreign policy, with precious little knowledge, experience or relationship-building accruing in Canadian circles. I agree with Welsh that Canadians should hold influential positions outside Canada, but the numbers of Canadians involved in the democracy field, and their effective exclusion from current Canadian democracy efforts, point to a potent capacity and energy that has been successfully channelled elsewhere.

Welsh is cautiously skeptical about the centrepiece of the committee’s report, a new Canadian democracy foundation. I would posit that a new foundation would not become, as Welsh fears, a “bureaucratic monster,” but a focal point for debate, discussion and creativity, a significant source of new funding and, at long last, a genuine point of engagement for those expat Canadians longing for a way of supporting their own country’s efforts. Welsh rightly worries about stifling the inherent creativity of a plurality of approaches by creating an umbrella institute, but, if done properly, a new focal point for democracy programs will unleash latent potential only hinted at under the status quo. If Canada gains some much needed international profile in the bargain—so much the better.

“Great Disappointments” (December 2007), your short course in literary demolition, was entertaining, but it left me wondering where some of your writers got the idea that Richard Ford’s The Sportswriter, Ivan Turgenev’s First Love, Don DeLillo’s Underworld and Philip Roth’s The Plot Against America are classics (or, as you put it more tentatively, “classics”)? Then there’s As for Me and My House which is, let’s be clear, a Canadian classic, something ersatz, closer to Frederick Philip Grove’s Fruits of the Earth than to The Brothers Karamazov. Speaking of the last, when my colleague Keith Oatley confesses to finding Fyodor Dostoevsky’s novel “boring,” he might want to look over his shoulder at Lionel Trilling’s comment that some of the modern classics once found him boring: “I have been read by Eliot’s poems and by Ulysses and by Remembrance of Things Past and by The Castle for a good many years now, since early youth. Some of these books at first rejected me; I bored them” (my emphasis).

As for Ulysses, I’m not sure that Rex Murphy is right in claiming that “it lacks the compelling artistic energy of managed suspense.” The majority of my students over the past four decades at the University of Toronto seemed to wonder and care about whether Molly Bloom would sleep with Blazes Boylan and how Leopold Bloom—one of the most decent figures in all literature—would respond. But even if, like Mr. Murphy, one doesn’t, the novel gives many other pleasures, as he backhandedly acknowledges. Surely there’s room in the house of fiction for novels such as Ulysses, Andrei Bely’s Petersburg, Hermann Broch’s The Dream of Virgil, Vladimir Nabokov’s Pale Fire and Georges Perec’s Life: A User’s Manual that focus on pleasures other than the big bang of “managed suspense.” We all need the big bang, but sometimes a back rub and a foot massage will do.

Finally, if, as Reed Scowen claims “Nostromo is a mess,” then I can’t help thinking that it’s the kind of mess that most writers—think of Greene, Naipaul and Le Carré—would sacrifice their significant other for. It has its flaws, but then classic doesn’t mean perfect; it just means great, unless, of course, you agree with Mark Twain that a classic is “a book which people praise and don’t read.”

Here’s a question for Oatley, Murphy and Scowen: however “bad” Dostoevsky’s, Conrad’s and Joyce’s novels might be, imagine a bookshelf with only The Brothers Karamazov, Nostromo and Ulysses on it. Now sit back and think of all the Booker, Giller, Pulitzer, Governor General and Goncourt prize winners of the past half century. How many would you set by their side confident that the newcomers will still be read and discussed at the end of the century?

Re: “A Satisfying Read,” by Barbara McDougall

Barbara McDougall’s review of Brian Mulroney’s Memoirs (“A Satisfying Read,” December 2007) states that “through the coup against Gorbachev and the rise of Boris Yeltsin, the need to bring about and stabilize democracy in the Soviet Union and subsequently Russia were never far from the top of Canada’s foreign policy agenda.”

Has she forgotten that immediately after this coup she announced on TV that Canada would do business with the new regime? To recognize this reactionary putsch with such speed was a disgrace to Canada’s international reputation, and a bad mistake even in Realpolitik terms, since the coup rapidly disintegrated. She could at least have waited for a few days.