Emperor of the North: Sir George Simpson and the Remarkable Story of the Hudson’s Bay Company

Keepers of the Record: The History of the Hudson’s Bay Company Archives

A couple of decades ago, when I completed my trilogy on the Hudson’s Bay Company, the Canadian Historical Review asked Jennifer Brown at the University of Manitoba to write a commentary about my middle volume, Caesars of the Wilderness. It included three lengthy chapters on Sir George Simpson, the greatest of the Company of Adventurers’ overseas governors, whose stormy stewardship held sway for most of four crucial decades and is the subject of James Raffan’s wonderful book Emperor of the North: Sir George Simpson and the Remarkable Story of the Hudson’s Bay Company. I called Simpson “the birch-bark Napoleon” because he ruled his empire, which then extended over one twelfth of the Earth’s land surface, from his flimsy yet indestructible fleet of canoes. My description of Simpson as “a bastard by birth and by persuasion” acknowledged his Scottish birth out of wedlock and emphasized his temper out of hell.

In her catty review, Professor Brown tackled my admittedly popular history with the derision most academics reserve for journalists whenever we dare venture into their holy ground as custodians of what they believe to be real, as opposed to invented historical truths. This brief review of a powerfully evocative book that transcends whatever boundaries still exist between the two disciplines is not the proper occasion to settle that particular blood feud.

Except that the literary arm wrestling between Professor Brown and me became a minor cause célèbre at the time—especially when she recruited First Nations’ women to boycott my book on national television—and is therefore worth repeating in the current context. The quarrel between us came down to my quotation from Simpson’s personal journal, in which he cynically referred to his bevy of Native mistresses as his “bits of brown.”

His was no part-time hobby. Grant MacEwen, a popular western Canadian historian (and later lieutenant governor of Alberta) had attempted to chronicle Simpson’s prolific sexual diversions, and concluded that the governor had “fathered 70 children between Lachine and Victoria.”

That would certainly have put new meaning into Simpson’s claim to be “the father of the fur trade.”

Author James Raffan, in Emperor of the North, wisely limits his genealogy to a dozen firmly documented offspring, and concludes that the total was “very likely more.” But he stays away from the “bits of brown” controversy.

I never for a moment tried to defend or even repeat that manifestly sexist and racist comment, except to point out that it was Simpson’s crudity, not mine. But I could not resist the bait when the editor of the Canadian Historical Review allowed me to respond to Jennifer Brown’s diatribe. I ended my more or less reasonable rant by inviting academics to join us hacks in a joint effort to raise the popularity and accessibility of our past. “Canadian history,” I concluded, stiletto firmly in hand, “ought to consist of bits of Newman and bits of Brown.”

That is a long-winded, roundabout way of paying tribute to Emperor of the North. Here at last is a book that consummates the literary marriage I had in mind. The text lacks nothing in authority or authenticity, yet it is a wonderful read to be treasured—almost hugged, if that is not stretching the metaphor too far. It is one of those rare books you don’t want to finish.

The author seldom takes risks but never hesitates to project his subject into the future. Thus this offhand remark about how Simpson invented modern Canada: “The very notion of a nation from sea to sea, linked by rivers flowing east to west, was one that George Simpson brought to life in the emerging public consciousness of 19th-century Canada.”

His descriptions of the freckled Simpson enduring the hardships of the canoe routes (and portages) come alive and anchor the book where it belongs: not as the saga of a Scottish business genius coming into his own, but as the tale of the lord of the lonesome forests, the rushing rivers and the men whose singular guts set down the template of a future economic empire.

And there is a bonus: Raffan is an expert canoeist, having completed several epic voyages, and has recently been appointed curator of the Canadian Canoe Museum in Peterborough, Ontario. At the same time, he appreciates the azure beauty and awesome prospects of Canada’s Arctic that poet Al Purdy so aptly located as being “North of Summer.” Simpson also emerges as a master showman, arriving at each isolated fur trading post of Scottish exiles, accompanied by his private piper, Colin Fraser, and his mournful bagpipe serenade—the voyageurs angling their canoes to land exactly where they were supposed to, so that the governor could step out without having to look down, like a pope, demanding worship. A fellow traveller described him as the toughest-looking man he had ever seen, “built upon the Egyptian model, like one of those short, square massy pillars one sees in an old country church.”

His critics reviled Simpson as ruthless, chauvinistic and petty—all of which he was. Yet if the history of countries and great institutions flows from the interplay between character and circumstance, he was the right man in exactly the right place at precisely the right moment.

While such once-glorious counterparts of the HBC as the East India Company were collapsing under the weight of their administrative overloads, Simpson’s whip hand transformed the Company of Adventurers into an ornament of Empire. More importantly, while Canada’s original patriots fighting for representative government were hived into the narrow boundaries of the St. Lawrence basin, Simpson became an engine of Canada’s manifest destiny, surging across the boundless reaches of his domain.

It was a cruel time. When several of his servants came down with a serious malady, John Rowand, the undisputed master of the HBC’s Fort Edmonton—who made Simpson seem a bit of a milquetoast—decreed that “any man who is not dead within three days’ illness is not sick at all.”

Do I have quibbles about this book? Of course. Why does the author, every time he quotes from a letter, feel he must reproduce it in full, instead of merely citing the relevant sentence or paragraph? Sometimes his thesaurus runs away with him. What the hell is “an impenetrable carapace”?

Still, the book’s great strengths are the tiny glimpses into Simpson’s humanity, such as the chance meeting with his disgraced predecessor aboard the ship carrying the new governor to his exalted new position. “And now, here they sat, William Williams, former fugitive [having been arrested for acting beyond his jurisdiction] and Williams’ future replacement, on a frigid March night in the middle of the broad Atlantic with ice a foot thick on the decks and rigging. Two would-be enemies in the lantern-lit cloister of a coal-heated packet salon, laughing until their sides ached.”

Raffan writes about Simpson’s exploits armed with the presumption of total familiarity, as if he had been paddling the governor’s express canoe from its stern thwart. From now on, Canadian history for me will not be complete without bits of Raffan.

Keepers of the Record: The History of the Hudson’s Bay Company Archives is a very different style of chronicle, being the bloodless audit of what is certainly the most significant business archive in the country. In more than 344 pages, author Deirdre Simmons recites the details of the holdings, how they were obtained, catalogued, preserved and prepared for public access. Since these priceless documents, housed in their own building in Winnipeg, were first made available for public viewing in 1975, they have prompted valuable genealogical research as well as several books.

Rumour has it that when the documents, paintings and historical objects were loaded onto a freighter to be moved from their permanent resting place at HBC headquarters in London, they were weighed for insurance purposes and that the scale tipped at 76 tons. That means that the HBC is probably the best-documented institution this side of the Vatican. Certainly it is as interesting and, I suspect, much livelier.

The highlight of my own trek through the HBC archives was finding a dispatch from James Isham, then the factor in charge of York Factory, the company’s chief depot on Hudson Bay. In it, Isham complains about the plague of mosquitoes that have inundated his settlement and, to prove the point, there in the middle of the parchment is one of the squashed insects, good British blood still leaking out of it onto the page.

Simmons has fulfilled her assignment well, even if—by the definition of her task—she could not venture beyond the factual to the sublime. Canada’s federal archivist, Ian Wilson, comes closer when he makes the valid point in his assessment of this treasured archive that it is “more than an integrated record-keeping system, maintained for more than 300 years. This is more than so many journals, account books, ledgers and letters. It has all the intellectual integrity of the manuscript of a great novel, a famous painting or a multi-volume encyclopedia. All are worth more than their separate elements. The HBC Archives is a similar coherent work, created by many hands over the generations, but the outcome of one continuous record system.”

That is a wise and relevant comment but it does not take into account the personalities and professional persistence of the succession of keepers who have been in charge of the collection since it began in 1681, under the guidance of Onesiphorus Albin, then the HBC’s corporate secretary.

The move of the records to Canada was guided by Shirlee Anne Smith, who served as keeper from 1973 to 1990. She was my main contact with the Company of Adventurers and never have I been more fortunate in finding a corporate historian as enlightened and knowledgeable as she. Smith also had a sense of wit and fun about the subject and guided Allan Levine, my chief researcher, into venues and hidden corners we might have missed.

I am happy that this useful book gives her—as well as her many predecessors and successors—the credit they so richly deserve.

Re: “The Adventurers Are Back” by Peter C. Newman

Peter C. Newman’s review of James Raffan’s George Simpson biography, Emperor of the North: Sir George Simpson and the Remarkable Story of Hudson’s Bay Company (“The Adventurers Are Back,” April 2008), hardly gives that book the attention it deserves. Most of the review is a petty attack on Jennifer Brown for her unflattering review, years and years ago, of one of Newman’s own Hudson’s Bay Company books. Newman has had an extraordinary career. As his recent encounter with Brian Mulroney proved again, he is a genius with an interview. But you cannot interview the dead, and Newman never got into his historical subject the way he does... 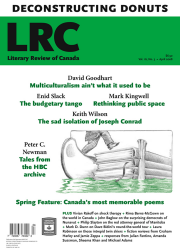