Princeton, 1932 to 1933. The Ku Klux Klan torches a sinister cross; local vigilantes kidnap a labour organizer; the town seethes with sensationalist attack on Soviet-inspired Reds. This is not Woodrow Wilson’s Princeton; these are not United States happenings. Rather, this all takes place in an industrial hamlet in southern British Columbia’s Similkameen Valley, site of a number of bitter strikes by the Mine Workers Union of Canada.

Provocatively titled, Soviet Princeton: Slim Evans and the 1932–33 Miners’ Strike is authored by two residents of the small B.C. town whose population is roughly double that of the 1,000 who lived and worked there in the early 1930s when the Tulameen coal mine was the major employer. Jon Bartlett and Rika Ruebsaat are musicians who collect and perform traditional ballads, shanties and folk songs. This musical vocation originally piqued their curiosity about Princeton’s seemingly forgotten labour past.

Vancouver Folk Circle founder Phil Thomas included a number of work and protest numbers in his Songs of the Pacific Northwest, reissued in a 2007 version edited by Bartlett. During visits to Princeton in 1974, Thomas unearthed evidence of lines sung to traditional tunes, the lyrics obviously connected to a violent work stoppage: “The cops’ll have a hell of a time / Trying to break the picket line.” 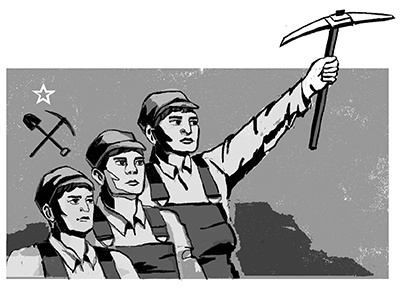 It was a cryptic photograph complementing these song fragments that prodded Bartlett and Ruebsaat to dig into their town’s history. The image appeared in a local antiquarian publication, Princeton Our Valley. Two men stand beside a mock tombstone, the epitaph on the monument reading “In Memoriam, Princeton, Killed Winter 1932–33 by Evanskivich & his Dupes. R.I.P.”

Who was Evanskivich? No one in Princeton seemed to know. In search of answers, Bartlett and Ruebsaat turned to archives, libraries and university special collections, to a documentary record that included, first and foremost, the local newspaper, the Princeton Star, but also Communist Party of Canada publications such as the Unemployed Worker, legal transcripts, and a variety of scholarly and left-wing publications. Stephen Endicott’s Raising the Workers’ Flag: The Workers’ Unity League of Canada, 1930–1936 contains the most direct, if succinct, statement on the Princeton events that Bartlett and Ruebsaat address.

An obscure book they encountered was a compilation of documents and commentary, “Work and Wages!”: Semi-documentary Account of the Life and Times of Arthur H. (Slim) Evans, about a larger-than-life Canadian labour radical. Put together by Evans’s daughter Jean Sheils and a veteran organizer of relief camp workers Ben Swankey, the text is an indispensable guide to anyone looking to chase down the peripatetic Evans and follow the course of his left-wing adventures, including a stayover in the Similkameen Valley. Surprisingly, it receives sparse citation in Soviet Princeton, figuring in a mere handful of the more than 100 footnoted references.

Heralding Bartlett and Ruebsaat’s treatment of Evans and the Princeton strikes as “never before told,” which New Star Books does in a perhaps understandable marketing move, is thus a tad exaggerated. What the two locally based researchers do well, through a close reading of the Princeton Star, is meld together older, if obscure, appreciations of the strikes with new detail on the role played by the town’s elite.

The events outlined by Bartlett and Ruebsaat took place between September 1932 and May 1933. In nine months the owners of the Tulameen mine, known for salting their workforce with stool pigeons and firing anyone who stepped ever so gingerly out of line, demanded repeated wage cuts. Lacking a union, the disgruntled colliers turned to the Vancouver offices of the Communist Party–led Workers’ Unity League, which dispatched Evans to Princeton. By December 1932, the workers, now a local of the Mine Workers Union of Canada, were embroiled in the first of a number of strikes and lockouts that would divide the town over the next six months.

The workers’ demands were largely successful and modest: rescind wage reductions and improve safety conditions. A workers centre was set up in a rented hall, providing employed miners and Princeton’s unemployed workers, affiliated with another communist-led outfit, a place to socialize and strategize.

At the centre of it all was Evans. He first appeared in Princeton in September, advising the miners not to strike until the winter demand for coal improved their leverage with the bosses. Evans was the kind of bête rouge who plunged the dagger of fear and class loathing deep into the bosom of the bourgeois state. He personified the stereotypical outside agitator, who conjured up the commonplace vision of every labour and unemployed protest in the 1930s escalating into a revolutionary Soviet uprising.

Especially noteworthy is how the newspaper’s owner and publisher, Dave Taylor, fanned the flames of a vitriolic anti-communism. Taylor either coined or popularized the red-baiting and racialized sobriquet “Evanskivich.” This conveniently typecast Evans, who was Toronto born and whose parents were English and Irish, associating him with the politics of the Soviet Union and the “alien” miners of Princeton, often denigrated as “bohunks.”

British Columbia’s attorney general Robert Poole followed Evans’s every move. He dispatched a corps of close to 40 provincial police and RCMP to monitor Evans. Refusing to be cowed, merciless in his mockery of the armed agents of the state who hounded him, Evans dubbed these adversaries Pooley’s hooligans. The miners, perhaps acclimatized to deference to constituted authority, were astounded. They admired Evans’s pluck.

In the midst of the first strike, Evans was arrested and charged (as had been Tim Buck and other communist leaders in Ontario) under section 98 of the Criminal Code. He was whisked out of Princeton and deposited in far-off Oakalla Prison. A hangover from the days of the Winnipeg General Strike, section 98 subjected anyone affiliated with an organization advocating government, industrial or economic change, ostensibly through the use of force, to criminal prosecution for belonging to “an unlawful association.”

Pooley’s police also harassed the local union leadership. The gendarmes did their best to turn a December strike into a violent clash. Women and adolescents, along with the men of the mines, were beaten with batons. According to one oral recollection recounted in Swankey and Sheils’s book, Pooley’s hooligans drove a Caterpillar truck through the middle of a picket line, scattering union militants into an icy river. All this only steeled the determination of the miners.

The Ku Klux Klan then made its Princeton appearance. Cross burnings, threatening letters and physical beatings followed. Klan notes advised: “Agitators take warning and move on or suffer the consequences.” Repulsed by such activity, some local businessmen joined with the miners to protest the Klan’s presence in Princeton. By the late winter and spring of 1933, it was fading from view, its role taken up by the more respectable Citizens’ League, headed by Taylor and Percy Gregory, president of the Princeton Board of Trade.

As the town continued to be disrupted by strikes and lockouts, Taylor and the Princeton Star upped the decibel level of the shrill anti-communist din. A Red Scare culture was congealing:

The “Red Flag” is now sung in school.

The mines are closed, the town is dead.

The children now cry out for bread.

So, Pilgrim, walk with muted tread;

You are passing o’er dishonoured dead.

Through cowardice, we must allow

That Evanskovich is ruling now.

The workers centre was closed, the building’s owner threatened with section 98 prosecution. Evans had actually sung “The Internationale” within one of the town’s halls.

The pièce de (counter-)résistance was the kidnapping of Evans, now out of Oakalla on bail. Known police constables, Princeton’s leading Klansman, and a local doctor and pillar of the Citizens’ League, headed up the vigilantes. They abducted Evans at gunpoint, forcing him from a Princeton home, where he was an invited guest having an incendiary cup of tea. A convoy of armed cars then drove him to a remote railway line, and put him on a train to Vancouver. Undaunted, the resolute Evans returned to Princeton immediately, greeted by the Star’s announcement that he “was not wanted” in the mining town. Another abduction followed in mid May, with police, local coal mine managers, Taylor and Gregory involved in spiriting Evans away to a Penticton jail where, according to Swankey and Sheils, he languished for three days until trumped-up charges of carrying a concealed weapon (a short stick) were dropped. Eventually convicted on the section 98 charge, Evans was sentenced to a year in prison. The mortgage on his Vancouver house fell into arrears, and his wife and seven-year-old daughter Jean were evicted.

Bartlett and Ruebsaat’s book tells this story, for the most part quite effectively. It is a fascinating chapter in labour organizing in Canada, highlighting the leadership of the redoubtable Evans. It also provides insight into how the Klan elements that on occasion made an appearance in this county extended their attacks against racial, ethnic and religious minorities into assaults on trade unionists and infamous “outside agitators.” But questions remain.

Who were the miners of Princeton? We glean some insights about these actors, to be sure, yet Bartlett and Ruebsaat tell us little about their work routines, their community lives, their ethnic backgrounds (it is intimated that the Tulameen workforce was primarily British, with a significant eastern European presence) and what communism meant to them, if anything.

How about Evans himself? Earthy and erudite, socialist and sociable, he deserves a full biography of his own. A maverick by any standard, he was more comfortable in the One Big Union of the 1920s or the Communist Party of the early 1930s than he would be in a later, less audacious and more respectable Popular Front Party. For all the centrality of Evans in Soviet Princeton, however, reflection on how this vernacular revolutionary fit into the imagined community of Canadian communism is not really evident.

After his release from incarceration, Evans led the famous hunger march of relief camp workers in their summer 1935 On-to-Ottawa trek. Accompanied by a few others, he secured an audience in Ottawa with Prime Minister R.B. “Iron Heel” Bennett, the two clashing in a war of words. The trekkers would then battle the RCMP in the Regina Riot. Evans stayed the course of a committed working class organizer during the later 1930s and early ’40s. As he was returning home from a trade union convention in 1944, he was hit by a car and succumbed, at the age of 53, to injuries sustained in the accident.

A man whom the state could not quiet unfortunately chance silenced. Patrician Princeton could finally rest easy.

Bryan D. Palmer, long associated with the journal Labour/Le Travail and chair of the Canadian Studies Department at Trent University, is author or editor of 20 books on working class history and related subjects. His most recent, Toronto’s Poor: A Rebellious History, co-authored with Gaetan Heroux, will be published by Between the Lines in 2016.