There are few things more disheartening for a young do-it-yourself enthusiast than to have her posters unceremoniously torn down. I experienced this mini-war of attrition several years ago in Halifax. My friend and I had launched an all-female DJ night and I ran excitedly through the streets late one night, plastering our bright photocopied posters over streetlamp poles and on cable boxes, taping and stapling with impunity—or so I thought. A few days later I strolled through the city’s north end with a friend to point out my handiwork—and to my shock only scraps and tattered corners remained. Someone had methodically torn down our handiwork, one photocopied sheet at a time. I was aghast.

And so I was introduced—however unwillingly—to the politics of photocopied media. As long as DIY promoters, artists, writers and creators have embraced the cheap freedoms of photocopied print media, cities and residents have fought to remove what they perceive as cheap, dirty blights on their city’s landscape. And while cultural critics have bled page after page of words about the erasure of various other forms of street art—like, say, graffiti’s erasure in 1990s-era New York City—there has been very little written or said about the function of photocopiers and photocopied media and the changes to this media over time. Adjusted Margin: Xerography, Art and Activism in the Late Twentieth Century, the exhaustive and brilliant history of the photocopier by academic and poet Kate Eichhorn, examines the photocopier as an essential tool of community building, activism and social change. In presenting us with this invigorating and inspiring depiction, she gives heft and permanency to a machine that might otherwise be considered a hoary artifact of a bygone era.

Eichhorn opens the book with an overview of xerography in its earliest incarnations, starting with the stencil-based Papyrograph (invented in 1874) to the first xerography copy, produced by the American physicist and inventor Chester Carlson in a makeshift laboratory in his New York apartment in 1938. Originally called electrophotography, Carlson’s process involved a series of steps: creating an image on a slide with India ink, rubbing sulphur on it to create an electrostatic charge and placing the surface under a lamp. The process was refined by the Haloid Company—later known as the Xerox Corporation—and xerography began to take off in American offices. 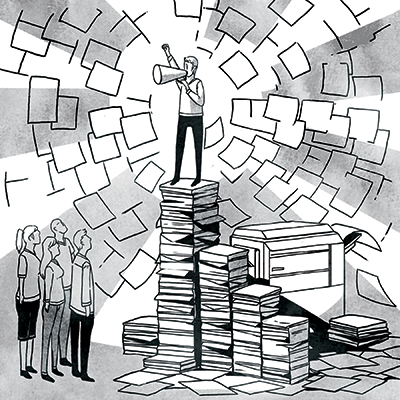 In outlining this history, Eichhorn establishes the machine’s “intended” purpose as a copier for businesses and the roots of its later persona through some fascinating tidbits—for example, Carlson eventually used profits from his patent to fund research in psychic phenomena, and was a supporter of desegregation and pacifist causes. Eichhorn’s point about Carlson’s politics is fascinating—that even in the early days of xerography, the radical (for the times) politics of the inventor of the early photocopier seemed to unintentionally set the groundwork for his invention’s more grassroots political functions.

The cost effectiveness of photocopying had created a boom in the practice by the late 1960s—as Eichhorn writes, much in the way we obsessively back up our data today, photocopy users slowly became obsessed with the concept of multiple copies in order to preserve important documents. But while xerography quickly assumed its place in the industrial queue of the office assembly line, Eichhorn points out its far more interesting genesis into a tool of independent DIY creation and, effectively, subversion.

In part, this is due to xerography’s democratizing accessibility, highlighted by Marshall McLuhan as creating an “extreme decentralizing” that would lead to revolution. McLuhan was talking about authors self-publishing their works outside of the aegis of publishers, but his words apply to many of the movements that flourished with the assistance of cheap and accessible photocopying. Eichhorn highlights many of these movements in the ensuing chapters, beginning with photocopy art. It is perhaps hard to imagine today, but in the 1960s the photocopy craze was so prevalent in art circles that the University of Chicago introduced a master’s degree that had copy art as its main focus. The intriguingly named Generative Systems Department, led by instructor and artist Sonia Landy Sheridan, explored the artistic potential of works produced by a range of mimeographic technologies, while also acknowledging the limits of these machines. “Indeed, copy machines’ built-in restrictions—the fact that they were engineered rather than to create—was part of their attraction and challenge,” Eichhorn writes.

Meanwhile, groups such as Fluxus began employing copying to quickly disseminate their own works, pamphlets and manifestos, while other artists used photocopying technology to bring out-of-print and marginalized literature back into the hands of readers. I am reminded here of the wave of ASCII text art and poetry that sprouted in the early days of the internet, which sought to make experimental writing and word art accessible to anyone who possessed a dial-up modem. Photocopy culture unwittingly set the groundwork for experimental and independent art practices merging with new technologies.

A major part of Adjusted Margin deals with xerography’s influence on social movements, with a particular focus on New York’s Lower East Side, with its explosion of punk show and art postering in the late 1970s (and eventual crackdown by Rudolph Giuliani in the 1990s) and zine and riot grrl culture and queer activism—particularly in relation to the fight against AIDS misinformation—in the 1980s. Much of this can be tied to the concept of “publics” (spaces defined by their relationship with and to a larger public) and “counterpublics” (opinionated spaces defined by critical relationships to power and authority), which are introduced by Eichhorn through the ideas of the social theorist Michael Warner. Eichhorn argues that the nature of xerography allows it a unique ability to straddle both publics and counterpublics, and effectively redefine these spaces, particularly within cities. In this framework, xerography yields highly visible, glossy and well-funded AIDS action material by 1980s artist collective Gran Fury, but it can also produce DIY handmade wheat-pasted poster campaigns from grassroots queer activists like early 1990s group Fierce Pussy, as well as handwritten and type-written zines that can fly via pen pal mail from New York City to rural towns all over North America and the world.

Of course, copy shops are not just sites of fun and openness and freewheeling artistic communities. They are also sites of illegal activity; after all, what student has not exceeded their copy privileges and copied entire versions of course texts as a cost-saving measure? Eichhorn posits that the same qualities that make xerography a boon to individualism and public creation also create suspicion and undermine modes of print capitalism. Among other examples, she cites the disturbing period following the 9/11 attacks in which one copy shop in particular—Toronto’s Best Copy near Ryerson University—was raided by the RCMP at midnight in September 2002. The RCMP later revealed that they had targeted the nephew of the copy shop owner, who had previously been detained and held by police for several months, and whose connection to the copy shop cemented his profile as a suspected terrorist. No one was charged with terrorism, although the shop ultimately closed due to the resulting bad publicity. Eichhorn writes that many university copy shops are run by people from marginalized cultures, and often these shops—already sites of illegal activity—are located on the literal margins of a university campus, separating the institution from the city. They are, as she writes, “First World ghettos inhabited by Third World professionals … vigorously policed.” Even as copy shops dwindle in cities, it is valuable to remember that many users of the copy machine were privileged in their clandestine practices (using the office copier for non-office purposes, copying illegally, borrowing and reproducing artwork, etc.) and, as with all grassroots activities, there can be very real consequences for certain users and proprietors.

For a book that deals with a piece of technology now considered largely outmoded (and replaced by digital scanners), Adjusted Margin ends on a wonderfully thoughtful and optimistic note. Eichhorn discusses a visit she made to the Deutsches Technikmuseum in Berlin to what she thought would be a copy-machine museum. She was led to a storage space of “somewhat neglected” machines, including a delightfully impractical wood-panelled 1960s copier manufactured by Fotoclark. In some ways, the dusty corners of this collection act as a metaphor for the photocopy machine’s place in culture today—unlike typewriters and record players, copy machines do not serve any fashionable retro aesthetic functions that would appeal to today’s consumers of hip artifacts.

Rather, Eichhorn argues, the legacy of the copy machine will forever exist in its function. She cites the Occupy Wall Street movement in 2011, with posters, flyers and zines accompanying the obligatory signal boosts on social media and email, and notes that this is a possible sign of the way the photocopier has perpetually altered the way we view public space and the way we take up space within cities with ideas, art and information. It is also a lasting signifier of the power of print media and the way certain blotchy, ink-stained DIY missives will forever contain their own fundamental and enduring communicative power. And for those of us who still live and die by our paper crafts, our handwriting, our stapling and pasting, the photocopier is a treasured item, and one that should forever be regarded with nostalgia and endless gratitude.

Alison Lang is the editor of Broken Pencil magazine, She has written for the Toronto Star, Rue Morgue, Aux, THIS Magazine, Quill & Quire, and Weird Canada. She recently contributed to the Spectacular Optical anthology Satanic Panic: Pop Culture Paranoia in the 1980s.