The Ghost Garden: Inside the Lives of Schizophrenia’s Feared and Forgotten

Ghosts Within: Journeying through PTSD

The setting could be anywhere — exam hall, darkened bedroom, office cubicle, fluorescent ward hallway, family dinner, warm subway grate — but the feeling remains the same. All your physical, mental, and emotional energies have been spent trying to contain something you don’t fully understand, yet somehow you have been confronted by One More Challenge. It may, on the surface, appear to be a minor event — the startling wail of an ambulance, a missing item on your grocery list, an out-of-place encounter with someone you used to know — but it’s enough to tip the scales. Your mask slips, and you transform from being systemically invisible to performing under a spotlight. Bystanders watch you out of the corners of their eyes. The police — well, they were watching you this whole time, weren’t they? Suddenly, the threat isn’t just inside you. It has leaked out and revealed an ugly truth. To those around you, you are the threat.

Such are the moments when people really start to think about mental illness, when interior struggles manifest themselves in the exterior world and touch the lives of others. It’s a human exchange that is all too often dictated by fear, not empathy. Even in the stories we tell about mental illness, fear pushes us toward narrative catharsis, a satisfying and definitive conclusion. They are narratives marketed through the promise of hope, as if there is a finish line for recovery. 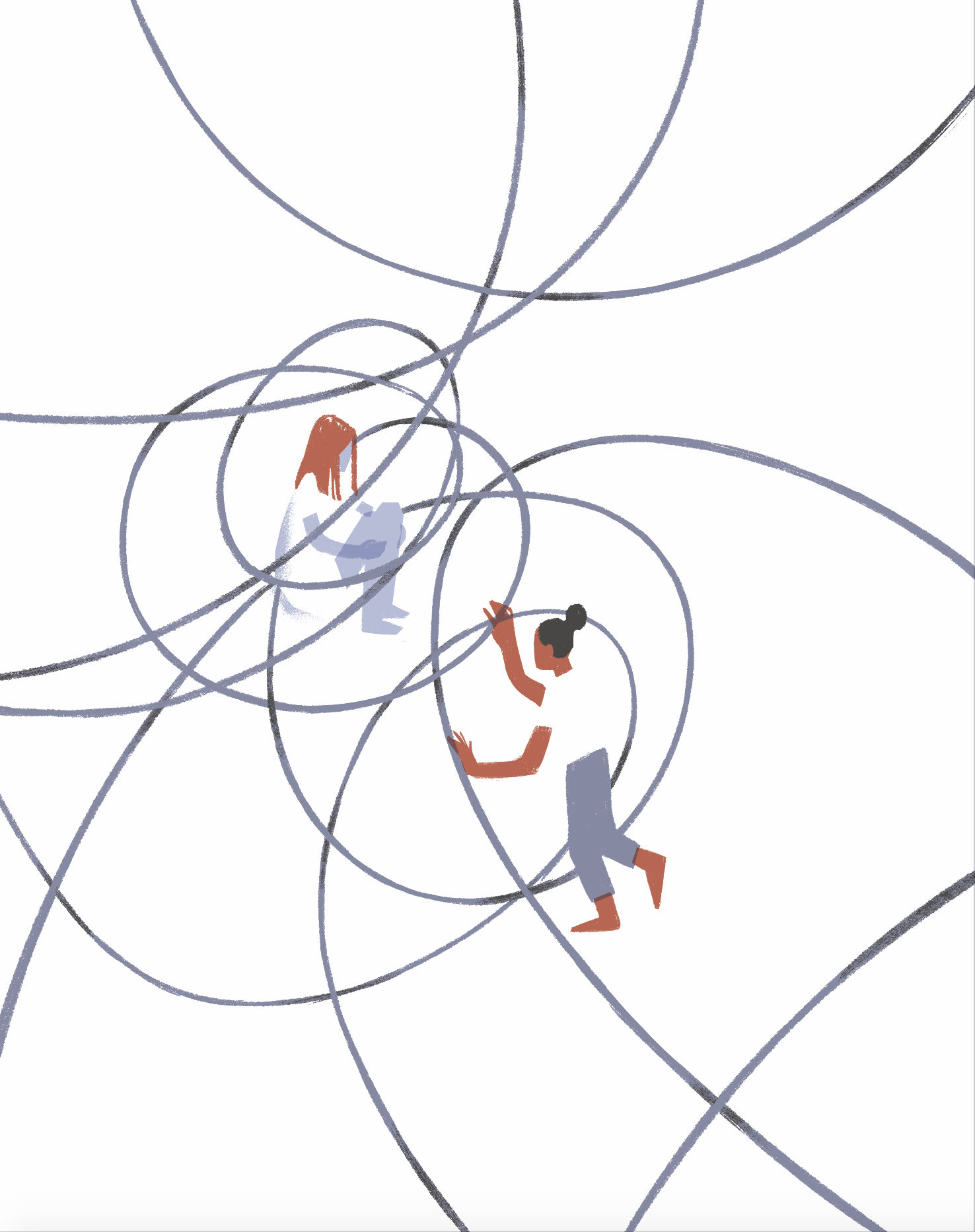 As someone who lives with a cyclical psychiatric illness, however, I know the finish line is a mirage. I’m not looking for cathartic hope. What I’m looking for is understanding.

Susan Doherty, formerly a Maclean’s writer, has spent the past decade getting to know in-­patients at the Douglas Mental Health University Institute, a hospital affiliated with McGill University. After researching the Douglas Institute’s troubling past as an insane asylum, Doherty was compelled to volunteer. In her weekly visits, she has witnessed the spectrum of schizophrenia through coffee dates, phone calls, shopping trips, and an un­official wedding ring exchange at the local Super C. The Ghost Garden is at once a love letter to the friendships she has built and a call to redefine the medical and family structures that attempt to contain and conceal mental illness.

Doherty hopes the book can help family members identify and understand the signs of schizophrenia. “So often we see the severely mentally ill as less than fully formed human beings,” she writes, “as ghosts of their ‘normal’ selves. As ghosts, they can appear to be inanimate, unreachable, and frightening, but they, like all of us, tend an interior garden that is lushly alive.”

The Ghost Garden is, in many ways, the story of Caroline Evans, a fictive name for a real friend Doherty has known since 1967. Since the age of twenty-­one, Evans has cycled through wards and group homes, her journey the result of repeatedly misdiagnosed paranoid schizophrenia. Combining Evans’s own memories, interviews with her family, and medical and court records, Doherty weaves together a gripping story that contrasts the tragedy of her friend’s delusions with the unwavering love and responsibility she feels for her family.

Doherty begins the story in medias res, a classic but problematic structural choice. Listening to the voices in her head, Evans pours boiling water into the ear of her sleeping roommate. From there, we trace backwards and see her graduate from high school, get married, leap into motherhood — all the while knowing that she will ultimately lose agency over her own life. This non-­linear loss of personhood is signalled through changes in setting: She moves from a family house with a child’s red swing set to a tiny apartment after her separation. In a hopeful transition, she finds a place with extra bedrooms for her two sons but then, frantically, ends up in a psychiatric wing. Living with mental illness often means occupying an uncomfortable space, both for you and for the people around you, but Evans attempts to reclaim her spaces and continue caring for her loved ones, even as they struggle to understand her illness.

The Ghost Garden probes human connections and empathy toward experiences society has cast as otherworldly. Doherty punctuates the larger narrative with eighteen explosive vignettes about others at the Douglas Institute, many of whom do not have supportive networks like Evans. Instead, they find community through friendships, late-night phone calls, and unspoken agreements with a psychiatric system that doesn’t have them figured out just yet. One shares with Doherty the existence of the titular ghost garden, an ethereal place where he can meet the souls of those he loves. The metaphor links the book’s short sections, where we glimpse the many pathways that people with schizophrenia walk.

At one point, Doherty asks a young man what schizophrenia means to him. His answer captures the essence of her book: “I’m a searchlight for a friend.”

Garry Leech’s Ghosts Within also speaks of searching, but of a different kind. A piercing combination of his own experience with post-­traumatic stress disorder and clinical research, the slim volume reads like a survival guide written by a close confidant.

Leech previously wrote about his time as an independent war correspondent, from 1999 to 2012, in Beyond Bogotá: Diary of a Drug War Journalist in Colombia. With his latest, he takes up the enduring psychological costs of that experience by delving into his traumatic memories and what followed his PTSD diagnosis in 2016, while still in South America. Writing from Cape Breton, he recalls, for example, witnessing a rape while imprisoned in El Salvador and discovering a long-lost daughter in Panama, and he acknowledges the complex relationship between his privilege, his masculinity, and his own perception of mental illness. Unflinchingly, he describes the toxic environment he created for his family when he refused to see a doctor — especially a male one. If other men are to survive their own struggles, he pleads, they need to accept help.

Leech speaks directly to those who have experienced PTSD — including veterans, survivors of sexual assault, and Indigenous peoples — through italicized memories that break up the main storyline. The result is immersive but compartmentalized, an approach that allows readers to skim or skip past potentially triggering scenes. And though he addresses such readers directly, he doesn’t offer them ­solutions — another ­compartmentalization.

While Leech recognizes the advantages that afford him private therapy, which ultimately gives him his life back, he doesn’t fully resolve what he calls the “secondary trauma” experienced by his family, particularly his wife and abandoned daughter, Johan, who “had forgiven me, so it was time to forgive myself.” The absence of their perspectives represents a missed learning opportunity, especially for those dealing with the guilt and aftermath of illness. If Ghosts Within is a sort of PTSD survival guide, it’s one that is perhaps too rooted in its own success.

Leech does talk of “lower[ing] the water level in my bucket.” It’s how he deals with the daily challenges of mental illness, and it’s a mantra I adopted as I read these books — reading that I did on mental health leave from my work. Still, I found myself falling into old traps, promising co-­workers that I’d be my regular self soon, as if my mental illness was some sort of temporary body snatcher. What I wanted to promise them was that I could possibly return — but maybe return to less. What I wanted to promise myself was that I would finally recognize this as progress.

Mental health narratives have long been important for understanding and accepting mental illness — among those who are afflicted and those who are not. They are essential gateways. The thing about traditional recovery narratives, however, is that they celebrate getting back to normal or, somehow, getting to a better version of oneself. Leech writes about a heightened sense of compassion and empathy, a feeling of purpose and responsibility that I understand all too well. Meanwhile, Doherty notes that “a winner’s tale is usually an easier sell, especially to oneself.”

The truth is that stories of linear recovery are damaging and create unrealistic expectations for those with chronic mental illness. It’s all too common to write about mental illness as something unearthly, something outside the norm, something to get beyond. Something that concludes with catharsis. While Doherty assures Caroline Evans that her story is not yet over, Leech hopes that his can help others with PTSD to “exorcise the ghosts that haunt them.” What if instead we approach mental illness not as a ghost, but an alternative mode that need not be othered or ­finished — just better understood? To do so, we must ­recognize — and tell — the unconventional stories of people with lived experience in unconventional ways. Only then can we truly support, accommodate, and empathize with them. Only then can we fully reframe our hardships.

Leanne Toshiko Simpson is a writer living with bipolar disorder. Her work was featured as part of the 2018 Bell Let’s Talk campaign.