Orwell in Cuba: How 1984 Came to Be Published in Castro’s Twilight

Researching Cuba as a Canadian living in New York was a disorienting experience. When I would describe my work, most people would react with surprise, curiosity, and even envy: Had I actually been there? At times, it seemed like views were as polarized as in any Israel-­Palestine debate. Back in Alberta, Canada’s supposed conservative heartland, my topic of study was met with shrugs. As I planned my first trip to Havana, a friend commented, “You can go there when you’re sixty. Why not try someplace interesting, like Argentina?”

Such reactions were a constant reminder that Cuba means different things to different people in different places. They were also the direct results of different foreign policies.

Fidel Castro and his band of guerrillas came to power in 1959, and the United States has been pushing for regime change since 1960, when the famous embargo was born. Washington prohibits most of its citizens from visiting Cuba; even Barack Obama’s 2016 reforms did not allow for unfettered tourism. Meanwhile, Canada is nearly the only state in the Americas to have consistently maintained diplomatic and economic relations with the island for the past sixty years (Mexico is the other). In a typical year, Canadians make over a million visits, mostly to beach resorts. In our popular imagination, Cuba is less “forbidden fruit” and more “Cancún with old cars and bad food.” 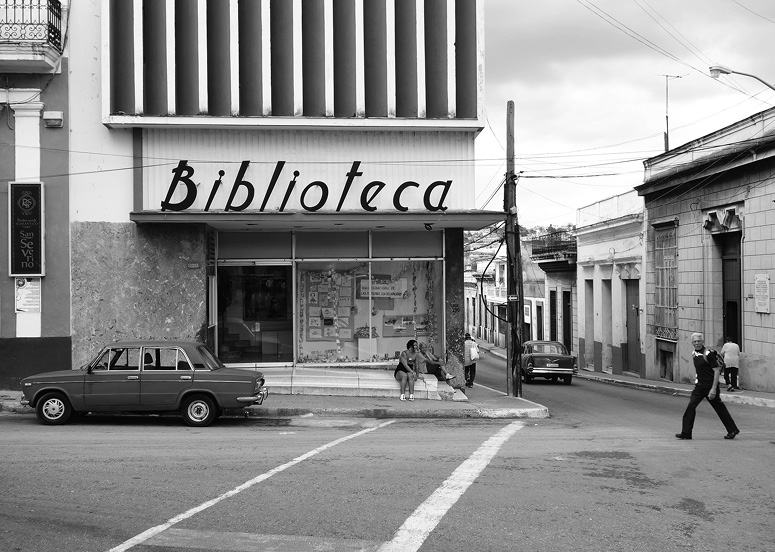 There are no beaches in Frédérick Lavoie’s Orwell in Cuba. But the journalist from Quebec evokes another familiar framework: Cuba as a crumbling Communist relic caught between the past and the future. This work presents itself as a time capsule, with its original title poignantly expressing a sense of temporal suspension: Avant l’après, literally “before the after.” Having won the 2018 Governor General’s Award for French non-­fiction, it has now been translated into English by Donald Winkler.

Lavoie had every reason to think Cuba was on the brink of a major transition when he made three trips there between February 2016 and February 2017. His first visit immediately preceded Obama’s arrival in Havana, which marked the most dramatic shift in U.S.-­Cuba relations in fifty years. The president denounced the embargo, and the movement toward reconciliation appeared irreversible. (Lavoie’s observation that “no matter who succeeds Obama as president in November, a return to the past seems more and more improbable” now has a tragic ring to it.) By the time of the author’s final visit, Donald Trump had been inaugurated and Fidel Castro had died, at the age of ninety.

Trump has not (yet) entirely reversed Obama’s reforms, but he has scaled them back dramatically, and the end of the embargo is no longer in sight. Meanwhile, Castro’s death in 2016 had little effect on the functioning of a state that had been run by his brother Raúl for a decade, and it certainly did not bring about the crisis of legitimacy some had hoped for. Last year, Raúl passed the presidency on to Miguel Díaz‑Canel, a bureaucrat from a younger generation, while remaining head of the Communist Party. Again, there has been no upheaval. The “after” may yet be some ways off.

Lavoie visited the island, in part, to solve a mystery. In 2016, a Cuban publishing house announced that it would launch a new translation of George Orwell’s 1984 at Havana’s International Book Fair. The choice was puzzling. A one-­party state with a long history of censorship was doing more than allowing the publication of a classic critique of totalitarianism: it was mass-producing it and promoting it at a major event. Was this a sign of how much had changed, or a cynical attempt to make Cuba appear more liberal than it was? Or was the publisher simply hoping for a bestseller, now that the state was inching toward market-­based reforms and had less time for ideological purity? Such questions, as well as a close dialogue with Orwell’s writing, dominate Lavoie’s book.

As an investigation of how censorship affects literature, the arts, and the media, Orwell in Cuba is nuanced and compelling. The central challenge in confronting Cuban censorship is its indeterminacy. The highly visible arrests of the artists El Sexto and Tania Bruguera are exceptions to a process that is generally much more covert. There is no official list of banned books, for one thing; unwanted titles simply go undistributed. Although all presses were nationalized in the ’60s, the mechanisms of editorial decision making remain obscure. Individuals push the envelope, proposing new editions of material previously assumed to be unacceptable. The only clear red line is the explicit and named denunciation of the Castro brothers. Even then, different rules apply for foreigners, and Lavoie is able to cross that line with seemingly few consequences.

In his quest to unravel the details behind 1984’s publication, Lavoie constantly runs up against these uncertainties. Some of his interlocutors may be lying. The vast majority have only a partial idea of what is going on. At times, he even comes off as paranoid — assuming acts of resistance when none were intended or being taken aback that some of his companions criticize the regime so openly. Indeed, it’s almost commonplace among literature scholars in Cuba to discuss and condemn the intense censorship of the 1970s, as many writers banned during that period have since been rehabilitated. But ongoing uncertainty about what is now allowed is also part of how censorship functions. People moderate themselves in an effort to avoid crossing poorly defined boundaries, making it only rarely necessary for the regime itself to enforce them.

It would be careless, in discussing a book that revolves around a translation and largely stars Cuban translators, not to discuss the translation here. Donald Winkler has three of his own Governor General’s Awards, and his treatment of Orwell in Cuba is consistently expressive, hitting a tone at once educated and accessible. He has the opportunity to show his chops when Lavoie breaks with his reportage format to include a satirical miniature play and a long poem. For the most part, though, the style is deliberately straightforward, eloquent but not showy; one is reminded of the guidelines that Orwell himself laid out in “Politics and the English Language.”

At times, Lavoie’s own reliance on Orwell goes too far, suggesting that censorship is conclusive evidence for other forms of state repression. His analogies ask us to imagine Fidel and Raúl Castro as the leaders of a real-world Oceania, taking cues on how to manage a totalitarian apparatus from Big Brother. The implication is that any state seeking to control access to information, to limit perspectives on the present and the past must have other crimes to hide. This framing obscures a key feature of Cuba among twentieth-­century Communist dictatorships: its low body count. The millions who perished in Stalin’s gulags, the mass starvation in China’s Great Leap Forward and the purges of the Cultural Revolution, the killing fields of the Khmer Rouge — these instances of bloodshed have only the palest of equivalents on the island. Historically, the vast majority of the opposition to Castro’s government has been exported to the United States rather than eliminated. Amnesty International identified 120 political prisoners in Cuba in 2018, which is a lot more than none and a lot fewer than some people might assume. Orwell’s 1984 sees its protagonist being tortured. Lavoie’s only truly harrowing account of state violence in Cuba dates to the early 1960s.

“The central challenge in confronting Cuban censorship is its indeterminacy.”

In other respects, Lavoie strives for balance, avoiding blanket condemnations and probing the contradictions of some of the Miami-­based Cubans he interviews. I am tempted to attribute this position to Canadian impartiality, but it is more obviously an effect of his work as a journalist in the former Soviet Union. There, he witnessed the results of a “failed” transition to capitalism, which benefited a few oligarchs while shredding social protections. Lavoie hopes that Cuba may avoid this fate and instead move to a form of social democracy. He dedicates significant space to the contradictions of the island’s contemporary economic system, in which two currencies coexist and doctors, paid by the state, make far less than bartenders collecting tips from tourists.

Above all, Lavoie seeks to avoid the trap of romanticizing the country and, unintentionally, producing state propaganda in the process. This becomes especially clear in his portrait of Jean‑Guy Allard, a retired Québecois journalist who relocated to Havana and found himself celebrated for writing material favourable to the government. Lavoie depicts Allard as a twenty-­first-­century “useful idiot,” a term once used to describe Jean‑Paul Sartre, another former Cuba admirer. He is in declining health when Lavoie first meets him, and his subsequent death is almost allegorical — a sign that seeing the Cuban Revolution as the electrifying triumph of the 1960s is no longer tenable.

There is, however, another counterpoint to Lavoie’s take on Cuba buried within these pages. After he gives a potentially incendiary reading at Havana’s International Book Fair, an unnamed Puerto Rican writer in the audience speaks up: Lavoie must consider “capitalist totalitarianism” to fully understand the situation in Cuba and the rest of Latin America. Against the backdrop of Allard, it is easy to dismiss this anonymous writer as another useful idiot, but the comment is also a reminder of how our frames of reference determine the questions we ask.

Within Latin America, the Cuban state has long secured its legitimacy on the basis of anti-­imperialism — not Communism. Its similarities to the Soviet Union have been far less im­portant than its differences from the region’s militarized, pro-­capitalist dictatorships of the 1970s and 1980s, which frequently had U.S. backing. Caribbean and African American observers, meanwhile, have often analyzed Cuba as a former plantation economy, asking how the 1959 revolution has confronted the lingering effects of slavery and racial inequality. But Lavoie has little to say about race, a prominent subject during Obama’s visit, or about the history of U.S. intervention in the Americas. His framework remains resolutely North Atlantic; he is travelling with George Orwell, an Englishman, after all.

This is less a criticism than a reminder of all the ways in which Cuba is still “made to mean” by visitors. Allard clung to the romantic revolution, while most Canadians see a banal vacation spot. Lavoie sees an opportunity to avoid Eastern Europe’s catastrophic surrender to capitalism where others look for the fight against racism or underdevelopment. And Cubans themselves? It is to Lavoie’s credit that he concludes his book by placing the future — and the tentative hope that it may yet be brighter — in their hands.