Book of Donair: Everything You Wanted to Know about the Halifax Food That Became Canada’s Favourite Kebab

First, a confession: I am a donair heretic here in Halifax. My fondest (albeit fuzziest) memories of this town’s iconic meat ’n’ pita mess-fest were actually made in Fredericton, circa 1995, and involved the highly dubious donair submarine sandwiches peddled by the equally dubious campus character known as Rog the Sub Guy. I also believe that lettuce absolutely does belong on donairs. And because I’ve been a vegetarian for over a decade now, properly spiced seitan passes for meat in my books. Finally, I confess that my eyes nearly got stuck in the back of my head from rolling so hard when the donair was declared the official food of Halifornia, in 2016. But maybe that is because I’m from Cape Breton, and our unofficial official food is the pizza burgers sold in gas stations (not that we make a scene by going around declaring it so).

It was in light of these egregious failures of fealty to the mighty street food that has saved countless wasted university students from the 2 a.m. munchies that I read Lindsay Wickstrom’s Book of Donair. And it was in spite of these failures of donair fealty that I found myself waving my copy in the air, thumping page 14 and yelling like a manic street preacher: “Back off, Edmonton! Donairs belong to Halifax!”

Because nothing brings out the ferocity of East Coast pride faster than another part of the country trying to claim something we know is ours. See those transplanted Maritimers who brought donairs out to the oil patch with them? They’re ours, too! But exactly how much of the donair can the East Coast — and Halifax in particular — really claim? Why does it even matter? What is it about a pile of spicy spit-roasted shaved meat stuffed in flatbread, topped with a sickeningly saccharine sauce, that gets us so worked up? 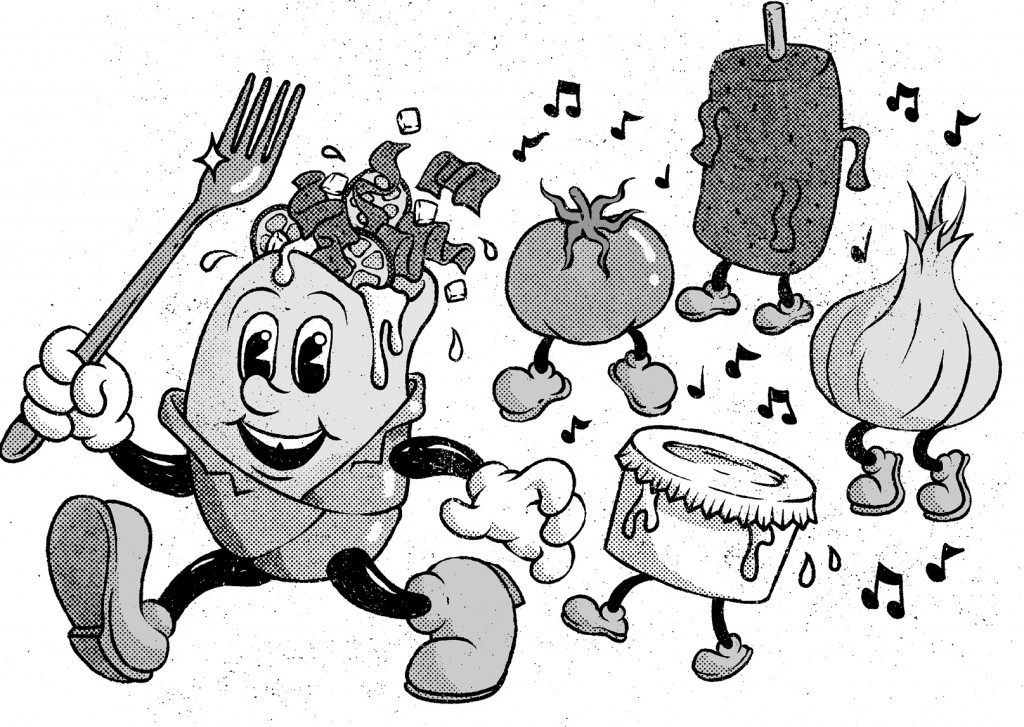 Halifax’s messy mascot is on a mission.
Image by Alex MacAskill

The donair is not exactly what one would call classy fare, given its reputation as something best enjoyed with dulled senses and a big bottle of antacids handy. As iconic foods go, it’s not posh like poutine, stylish like Nanaimo bars, or cozy like butter tarts (which, of course, should have raisins). But what the donair lacks in class, it makes up for in character. Donairs are a repository of so many personal, cultural, and historical tales for people in and from Atlantic Canada that they’ve become a symbol of identity and pride, even if they are a little rough on the guts sometimes. “So, donair history exists in fragments, slivers and vague accounts with large gaps that must be sewn into a story,” Wickstrom tells us. “It is no easy task to weave the tapestry of memories, blog posts, newspaper clippings, promotional materials and public directories.” The facts are as sticky and messy as the dish itself, but it’s the savoury story that helps hold it all together.

Book of Donair does a fine job of tracing the multiple international evolutions of what eventually emerged as the Halifax donair, as well as the pan-Canadian journey it has been on since that fateful day in the mid-1970s when Peter Gamoulakos concocted a sauce from “sweetened, curdled milk.” Yes, here is where I fall in line with Halifax’s purists: if it doesn’t have the sweet sauce, it is not a donair. At the same time, Book of Donair does a fine job of challenging the myth that the donair is a product of any one person, place, or period of time. Rather, the tale of this sloppy kebab is one woven through multiple food-pioneering families, various eating establishments, and several decades.

Wickstrom provides a detailed who’s who of Halifax’s donair players, and there were moments in the book when it felt like I was reading a saucier version of those bits in the Bible where so-and-so begat so-and-so, who then begat so-and-so, who then took off for Truro/Toronto/Edmonton and begat so-and-so. The recipes and methods for making critical components (that meat, that sauce) were passed on and passed around, restaurants changed hands and changed names, and the donair slowly made its way across Canada.

Wickstrom’s background as a Halifamous food blogger comes through in the conversational, comedic tone of her narrative (or, maybe I should say, do-narrative). While shedding light on the donair’s culinary history, the book also delves into its cultural impact. Nowhere is that impact more apparent than in the section dedicated to donair stories that Wickstrom asked fans to send in; she includes her own about being terrorized by “a noxious phantom odour” in the office of a donair-eating doctor. True to the sweet-meat pita’s reputation as a late-night staple of the sloshed-student set, a few of the stories start with somebody being drunk and end with something sketchy happening. But others feature donairs in pop culture references, alongside “feats of strength, airing of grievances, epic tales, anecdotes, sociables, and love stories” all powered by the hand-held food.

In recent years, the donair has been hauled out of the hazy, early-morning-munchies ­gutter and has made its way into the glammed-up street food zeitgeist, with everything from gourmet donair cupcakes to the donair sushi burrito. Book of Donair celebrates and embraces all iterations. With due homage paid to her subject’s humble Haligonian origins, Wickstrom concludes that, however messy, the donair has the power to unite a nation rather than divide one. It’s a satisfying story, slathered in love, wrapped in nostalgia.