The Taste of Longing: Ethel Mulvany and Her Starving Prisoners of War Cookbook

Suzanne Evans
Between the Lines
354 pages, softcover and ebook

If you’ve ever been properly hungry, you know it’s a sensation that takes over your whole body. By “properly hungry,” I don’t mean you’ve missed a meal or two. I mean when you’re already slim, without great reserves on which to draw, and you miss meal after meal after meal. This is the kind of hunger that becomes your only concern.

Suzanne Evans captures this preoccupation in her new biography of Ethel Mulvany, a Canadian internee at Changi Jail, the notorious Japanese prisoner-of-war camp for civilians in Singapore. “There is nothing like that debilitating, that going-down-the-valley-one-by-one pain of hunger,” she once said. “There is nothing where the body is more vulnerable to absolute capitulation.”

Evans was working as a research fellow at the Canadian War Museum, in Ottawa, when she first came across Mulvany, one of the driving forces behind the well-known Changi quilts, a secret communications system between female and male prisoners. The historian then rediscovered a forgotten cookbook compiled by the feisty woman from Manitoulin Island, who had survived on little more than bayam soup. “Not much more than cooked-up buffalo grass,” Mulvany later recalled. “How would you like that?” The camp staple’s monotony notwithstanding, Mulvany and others had fantasized a great deal about a great many foods. “How could the prisoners write recipes while starving?” Evans asks. “Why did they? Who were these women?” She does an excellent job at answering these questions by delving deep into the life of an outlier: a social worker, teacher, and ambulance driver from a remote place who dealt with both bipolar disorder and what we would now call PTSD.

Not content to settle for marriage, a family, and the expectations of small-town Ontario, the vivacious and audacious twenty-eight-year-old Ethel Rogers set off in 1933 to study school systems around the world, on a trip sponsored by the Canadian Society for Literature and the Arts. In Kyoto, she met the emperor and empress in their garden at the Imperial Palace. In Shanghai, the Canadian trade commissioner threw a party in her honour, shortly before fate and a dodgy stomach on board an ocean liner led her into the arms of a British military doctor, Denis Mulvany, stationed in Lucknow, India. 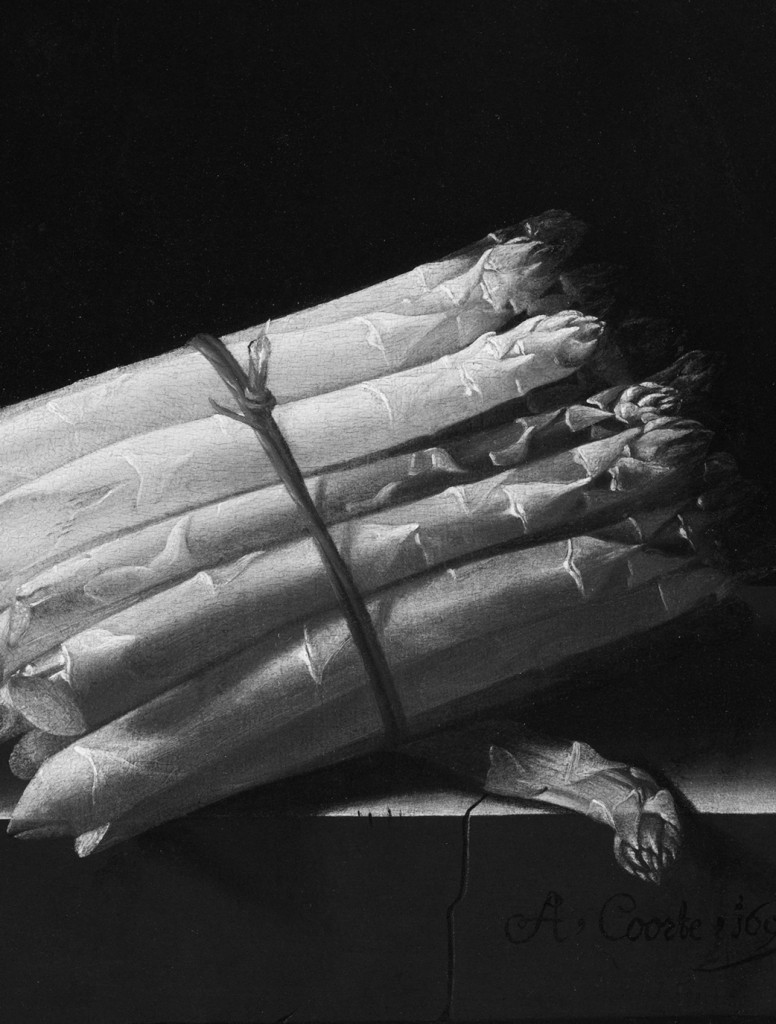 The prisoners' mouths began to water.
Image by Adriaen Coorte, Still Life with Asparagus, 1697; A. A. des Tombe Bequest, The Hague

The two soon married, and Ethel conformed to social mores and gave up her job. In Cawn pore, the couple had a staff of eighteen, or, as she put it, “twenty-two if you count the four who took care of the two horses.” With little to do, she volunteered — to the displeasure of her new husband — notably working to bathe and feed infants in the local hospital.

In spring 1939, Ethel and Denis planned a trip to Britain, where they would spend some time before she continued to Canada. Despite the looming threat of war, she arrived home, just in time to see her dying adoptive mother. Returning to the U.K. in September, she had her first bout of mania and was admitted to a nursing home; Denis, meanwhile, was posted to Singapore. Following her release, Ethel had an accident and dislocated her shoulder, which delayed the couple’s reunion. After sailing to Southeast Asia by way of Bombay, on an Italian liner packed with refugees fleeing the war, she wrote about the voyage’s food, a precursor, perhaps, to her obsession with the topic.

Ethel enjoyed a period of relative calm from March 1940, when she finally landed in Singapore, to December 8, 1941, when the Japanese started shelling the island city. And then, just like that, it was over. The colony fell on February 15, 1942, and by March 2, Ethel was on her way to her first internment camp. She was transferred to Changi a week later. (Denis was taken to a barracks at the tip of the island and did not see Ethel again until war’s end.)

It was at Changi — alongside 1,000 other women and 330 children — that Mulvany experienced more than two years of grinding misery and worked tirelessly to distract herself and others from that reality. She negotiated constantly for special dispensation to leave the camp, so that she might purchase extra supplies for her companions, and she occupied their minds with various projects, including the quilts, stitched from scraps and imbued with hidden messages. They also built a “silence hut,” to escape the constant noise: “There was nowhere on earth there wasn’t somebody yakety yak yakking.” By far her most successful diversions, however, centred on food.

Inspired by the poem “The Depression Ends,” by her former professor Ned Pratt, Mulvany organized “tea” parties, where dozens dressed in their prison best would envision what they would eat as soon as they were released: “As the women talked, their mouths began to water and soon they started having to swallow their saliva. After these sessions it dawned on Ethel that she was left with the odd but very pleasant sensation of having actually eaten.” Mulvany also encouraged the prisoners to write their favourite recipes down on bits of newspaper and old ledger books, and when she at last returned to Canada, in July 1946, she compiled some of their recipes in Prisoners of War Cookbook. “I want you to make me two thousand copies,” she told a reluctant printer on Toronto’s Danforth Avenue. “This is to remember the ones who died and to help those who just made it through.” In the end, he printed 20,000 copies on low-grade paper, the sales of which raised $18,000. With the funds, Mulvany sent oranges, tea, and cigarettes to former POWs living under rationing in Britain.

Evans includes one of those recipes at the beginning of every chapter. Some, such as toad-in-the-hole and posy pudding, are classic stick-to-your-ribs comfort foods. Others, such as fowl badum or dry curry, nod to something more exotic. In preparing the book, Evans asked her friends and family to test some of the seventy-year-old recipes, and there’s a charming postscript that includes their comments — helpful if you’re planning to try a couple.

With The Taste of Longing, Evans puts food into sharp focus in the complex and remarkable life of Ethel Mulvany. Thanks to in‑depth research and access to family members blessed with boxes of memorabilia, hers is a biography that marches along at the pace of a novel. No spoilers, but you can’t help but wonder whatever will happen next to this woman who is tormented by mental health challenges, solitary confinement, divorce, and the sadness of postwar life.