Where No Doctor Has Gone Before: Cuba’s Place in the Global Health Landscape

In the March issue of the Atlantic, Ken Stern writes about a central puzzle of philanthropy: members of the top quintile in earnings, in the United States, gave, on average, 1.3 percent of their income to charity; those on the bottom gave 3.2 percent. Stern quotes Paul Piff, a psychologist at the University of California at Berkeley: “While having money doesn’t necessarily make anybody anything, the rich are way more likely to prioritize their own self-interests above the interests of other people.” They are, he continued, “more likely to exhibit characteristics that we would stereotypically associate with, say, assholes.” As it is among individuals, so it is among countries.

Robert Huish’s Where No Doctor Has Gone Before: Cuba’s Place in the Global Health Landscape is a powerful broadside against the enormous international inequities in access to health care, not just ignored but furthered by wealthy countries. In this book, the Dalhousie University professor of international development studies examines the problem through the lens
of Cuba—where aid means, first, medical aid. “For a country with a humble economy and only 11.5 million inhabitants, Cuba has an unmatched global health workforce of over thirty-eight thousand health workers in sixty-six countries as of 2011,” Huish writes.

Huish expands on this point with examples: Cuba operates the world’s largest free eye surgery program and the largest medical school—mostly for international students. But the best and most grippingly described of these examples is the one he opens the book with. 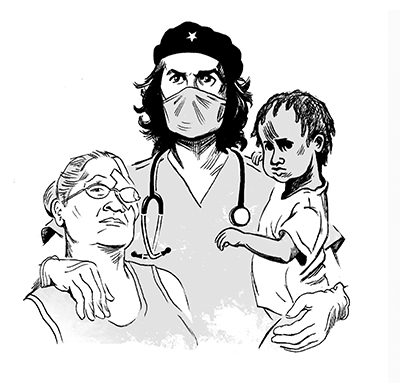 Dania Suarez is a Cuban physician whom Huish visited in the Ecuadorean Amazon. She worked then at the public clinic at La Joya de los Sachas. All around that small town, Huish writes, are gas flares shooting up from within the rain forest. And in that jungle are standing pools full of the larvae of Anopheles and Aedes mosquitoes, which carry malaria and dengue fever, respectively—“the kind that make you burn alive,” he writes, in one deft phrase capturing the recurring curse and paradox of oil wealth in developing economies: misery all around, under those flares, for everyone but the president. Huish relates the story of a 14-year-old girl who had been treated in the clinic nine months earlier, after she had been raped. During Huish’s visit, she went into labour. She delivered safely in that sparsely equipped clinic, where Huish helped rip cotton balls in half, to make them last longer. It is the only medical facility within 48 kilometres. Both the physicians who attended there were trained in Cuba.

Together with Venezuelan financial support, Cuban ophthalmologists run Operación Milagro, a cataract surgery program that has restored eyesight to more than 1.6 million people in the last decade. Patients treated in this program have come from throughout Latin America and Africa. It has expanded from its clinic near Havana into eight other countries. In the developed world, these efforts are not known, and hardly believed.

It is an astonishing idea that a country with the population of Ontario and an economy less than one sixth of Ontario’s should provide such an outsized share of all international medical aid. The idea gets as little attention as it does largely because of the influence of the Cuban exile community in the swing state of Florida, and the consequent debt of all recent American presidents, hawks and doves, to the Florida voter. Hence the never-ending embargo. Cuba makes the Iowa ethanol absurdity a lot easier to understand.

There is no denying the exiles’ characterization of the Castro regime as totalitarian, nor the country’s profound poverty, especially after the 33 percent fall in gross domestic product after the end of Soviet subsidies. Both these qualities would predict a de-emphasis of health care and of international aid. Why then, should it have the world’s lowest population-to-physician ratio, at 179? Moreover, why should it spend so much helping to provide health care to its neighbours?

This is the essence of the argument for soft power: influence and allegiance are easier and more durably achieved with humanitarian and cultural exchange than with any amount of hard—military—power. After the Cuban military adventures in Ethiopia and Angola, this may have been an insight they were well prepared to receive—although, after the debacles of the recent Asian wars, one might hope that the west, more generally, might come to see the merit of the idea too.

To contrast the roles the Global North and Cuba play in international health, Huish points out that 25 percent of physicians in Australia, Canada and the United States were trained elsewhere—in Canada’s instance, largely in South Africa, a country with a third as many physicians per capita. No compensation is paid to the countries so much poorer than our own, that train the doctors who care for so much of rural and northern Canada. On the other hand, Cuba has operated the La Escuela Latinoamericana de Medicina, the world’s largest medical school, since 1998.

It is an innovative program developed in response to the aftermath of Hurricane Mitch in Central America in 1998. Cuban medical brigades working in the affected region realized that droves of doctors would be required in order to improve the region’s human resources for health in primary care. Instead of offering its own doctors on an ongoing basis, Cuba decided to train students from those communities so that they would eventually serve them. Soon after, they expanded the school’s enrolment from victims of a single hurricane to include victims of structural violence from across the Americas and Africa. By 1999, ELAM had received 1,929 students from eighteen different countries.

By 2005, 11,000 international students from 22 countries were enrolled in the six-year program. (The largest educational effort America has offered in Latin America, Huish acerbically notes, is the now-closed School of the Americas, in Panama, which trained 60,000 soldiers and police, among them, the most notorious generals from Argentina’s Dirty War and Guatemala’s Civil War.)

Cuba’s role in the Caribbean and the developing world, more broadly, is complex and its government more morally ambiguous than Huish, an ardent Cubanophile, is inclined to acknowledge, but the central point of this fine work is crucially important: in a time of unprecedented disparity in global health outcomes, and while the International Monetary Fund insists on curtailing public health spending as one of the first steps in its oft-prescribed austerity measures, it is in the interest of countries that can help to help. The people who see this the clearest, are inevitably, the ones who are closest to that place of needing help. As it is with countries, so it is with individuals.

Kevin Patterson has sailed the British Columbia coast for 19 years. His last book was the novel Consumption, published by Random House in 2010.