i took a step back
alarmed that electricity was involved

Julie Berry was born in St. Thomas, Ontario, and she still lives and works in this small, southwestern Ontario city. Her poems have appeared in grain, Room of One’s Own, Quarry, Canadian Forum and Carousel and in numerous anthologies. Her first book of poetry, worn thresholds, was published in 1995 by Brick and reprinted in 2006. Two of her prose poems won in the 2005 short grain contest. Julie recently completed a second collection of poems entitled little strip room in heaven. 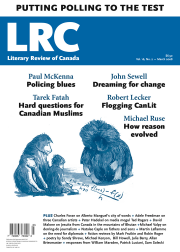